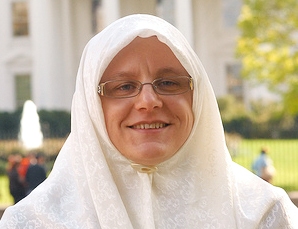 A US woman believes hijab appreciable when one practices for herself

TEHRAN, June 8 (MNA) – In an exclusive interview with Mehr News a US convert lady said she could not appreciate hijab until she put it on and experienced it for herself.

Diana Beatty, 39, from Colorado who works in a public high school in Colorado Springs, Colorado, USA. She grew up in a Protestant Christian household that also has a Mormon background, but not in a highly religious family.

She converted to Islam 20 years ago, in 1994, when she was a college student.  She said that when she met Muslims for the first time on campus and started to read a translation of the Quran out of curiosity, not really intending to find a new, she was surprised to find the same prophets and same God.

According to her Christian education, she had already learned about God and prophets which she saw from her ‘upbringing in the Qur’an’. “Some aspects of what I found in the Qur’an made more sense to me than in the Bible, such as prophets who were sinless, and God forgiving sins by His Will, without requiring the blood sacrifice of an innocent man (Jesus, peace be upon him) to bring it to be,” Ms Beatty believes.

After reading the Quran, she spent time studying the historical origins of Christianity and compilation of the Bible, which she believes gave her the confidence to believe in the Quran and Islam.

“It was important to me that the Prophet, peace be upon him and his family, practiced what he preached and exhibited kindness and sinless and wise behavior, consistent with what is expected of a prophet of God, and that his mission was consistent with the methods and patterns of revelation and prophethood throughout humanity’s existence,” said she.

According to what Ms Beatty achieved the Qur’an is logically and historically consistent, which gives credence to its origins and trustworthiness, the Ahlulbayt, [prophet Mohammad’s progeny] peace be upon them, are the most excellent role models and guides, although honestly the information we get about them tends to repetitive and mysterious and makes it hard to truly understand and learn from their examples as much as I would like.  “The Islamic understanding of God is the most logical I have encountered – and I do believe that religion has to something that our reason, our intellect, can comprehend and accept at some level.  If there is no reasoning in faith, then there is no way to discriminate between a valid or invalid claim or belief.”

She said if she was not in west she may not have had the opportunity to explore Islam and choose it in the first place.  Pointing to the Western Civilization she said it was not antithetical to Islam – ‘they are not inherently opposing systems.’ She believes freedom that the western civilization had given her helped her choose her path, in spite of clash between governments and cultures though.

Explaining more on West she said that there are differences between American and European cultures. “America is much more religious than Europe, generally speaking.  The media in US is not as engaged in a war against religion as one might suspect.  However, in general, when we see the move away from religion it is largely because what people have been handed with that label is something that they find either oppressive, illogical, or both.  And honestly most of the time they are right.  A lot of wrong things are done with religion as the excuse, and a lot of wrong things are claimed as true on the basis of religious belief, despite clear evidence to the contrary,” MS Beatty added.

Islam has an advantage in this regard when people come to an honest understanding of it, untainted by corruption, politics, and culture, because in its purest manifestations ‘Islam is just, compassionate, logical, and also not too difficult to follow.’

“Islam is a more logically sound religion than others, so this is intellectually satisfying.  Much intellectual advancement in history, as well as preservation of ancient learning, is thanks to Muslim effort, and even today, although the zenith of Islamic cultures (not Islam the religion) appears to have passed at least for the time being, Muslim intellectuals are known as being among the best in the world.”

“There are also some people who oppose Islam for media propaganda. And they take full advantage of every example and are free to manipulate their own examples to present the worst image, so the Muslim world is in need of people who follow the deen [religion] with excellent akhlaq [morals] and are highly educated, who can communicate clearly the real Islam even to those who are confused or misguided in a language they understand, from within their own cultural contexts.”

“We need Muslims living in the Western lands as fully integrated communities and individuals and not in isolation, so that people look to their neighbors to understand Islam rather than to propaganda.  I think people need to learn about the Ahlulbayt, peace be upon them, and their teachings and examples, in order to see the potential of Islam and what it is meant to be.  I cannot and will not defend Wahabism or Salafism to my Western family and colleagues. Those deviations are what are often presented as Islam here in the media, because understanding of Islam and Muslim cultures is very simplistic and monolithic.”

Asked about hijab and whether it was ok with her to accept, Diana said that wearing hijab was the hardest thing to start doing in terms of practice when becoming a Muslim, because it was extremely upsetting to the family and friends. Her family felt it was a rejection of themselves and how they brought their child up, and it terrified them to have their daughter stand out as a Muslim so visibly and publicly in a society where Muslims are typically associated with terrorists.  She said that her mother cried heartbroken tears for weeks which also broke her heart.  That made her careful to try to observe hijab properly “but in a way that is thoughtful of my parents needs like wearing colorful clothes. She said she tried her best to fully cover her body in accordance to the Islamic teachings.

But she started to put on hijab after studying and becoming convinced it was really in the Quran, but she emphasized until wearing it she did not understand it and thought it seemed unfair.  “I could not appreciate it until I put it on and experienced it for myself.  I was never a lady who dressed up for men; I was more of a tom boy and dressed casually and fairly modestly to begin with.  But I observed with hijab on that men talked with me looking at my face more and in general people were a little more polite; this helped me to understand what hijab does in the social sense.” She added that after the adjustment period of initially putting on the hijab, her parents got used to it.

For closing the session Ms Diana Beatty advised everyone to read translation of Qur’an [if they do not understand original Arabic] cover to cover.  “Not all translations are equal in conveying the meaning, but any of them will give a basic understanding that most non-Muslims lack.”