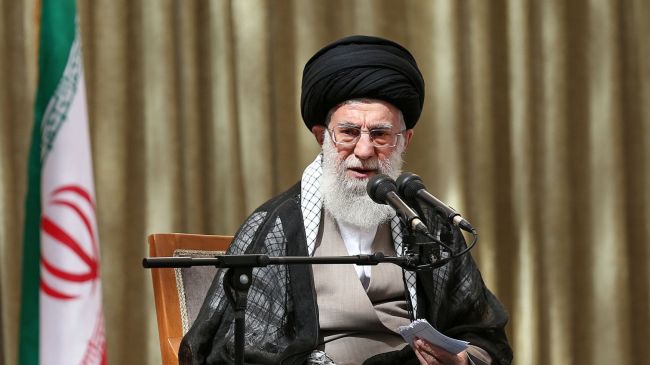 Ayatollah Khamenei says Iran has never capitulated to the West.

Leader of the Islamic Revolution Ayatollah Seyyed Ali Khamenei says the Islamic Republic of Iran has never succumbed to the West, and managed to make progress day by day.

“Our external challenge is the troublemaking by the [global] arrogance. Let’s speak frankly; the troubles [caused] by the United States,” Ayatollah Khamenei said in an address at Imam Khomeini’s Mausoleum in the south of the Iranian capital of Tehran, on Wednesday, marking the late Imam’s demise anniversary.

Even some American analysts may be of the conviction that such trouble-making would be to no avail and fail to counter the Islamic Republic, said the Leader, adding, “But the US is still making troubles, and their agenda should be identified.”

Ayatollah Khamenei emphasized that European countries are making a “big strategic mistake” as they respect US interests while Washington refrains from respecting theirs.

Military action is not currently a priority for the US after it suffered losses during its invasions of Iraq and Afghanistan, the Leader stated.

“Today, Takfiri groups are working against Islam and Shi’ism in certain regions and carrying out evil acts, but they are not the main enemies. The main enemy is the one who provokes them and provides them with money,” Ayatollah Khamenei said.

The Leader described Takfiris as “unwise groups” which have been deceived.

Ayatollah Khamenei warned that everyone who attacks Iran will face the country’s “clenched fist.”

The leader further stated that the wave of Islamic Awakening in the region may have been suppressed in some parts of the Muslim world “but it will undoubtedly prevail.”