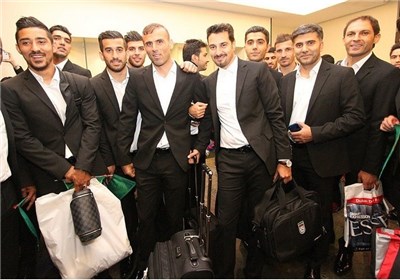 TEHRAN (Tasnim) – The Iranian football team arrived in Brazil as the third participating team in the 2014 World Cup.

After Australia, the first of the 31 teams to land in Brazil, Croatia and Iran arrived in the country on Tuesday, 3 June.

Iran landed at the Sao Paulo International Airport on at 4:10pm (local time).

Iran will open its World Cup campaign in Group F against Nigeria on June 16 in Curitiba.

The Iranian football team is also scheduled to face Argentina on June 21 and Bosnia and Herzegovina, June 25.

According to FIFA, upon arrival in Sao Paulo, Iranian Coach, Carlos Queiroz, said that his team would do everything possible to have a successful campaign at the World Cup.

“As we came from the other side of the world, we arrived earlier to start our preparation.

“We have earned the right to play against the best; now it is time to do it. We have 90 minutes in each game, and we will use them the best way,” the football governing body quoted Queiroz as saying.