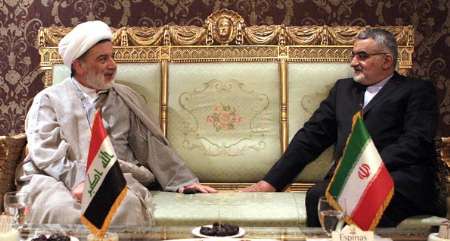 ˈThe new Iraqi parliament supports expansion of relations with the Islamic Republic of Iran,ˈ Boroujerdi said during the meeting.

The senior Iraqi lawmaker expressed the hope that Tehran-Baghdad relations will improve soon, and hailed Iran for holding the 2nd Meeting of Parliamentary Foreign Policy Commissions of the Friends of Syria countries.

Al-Hamoudi underlined that the recent parliamentary elections in Iraq was a step forward in consolidation of the growing trend of democracy in that country.

The Iraqi legislator pointed to the upcoming presidential election in Syria, and said, ˈResolving the Syrian crisis through political means or holding election in that country is feasible.ˈ

Boroujerdi, for his part, pointed the status quo of Iran-Iraq relations, and while felicitating the Iraqi government, nation and parliament on successful holding of the Arab countryˈs parliamentary election said that the people of Iraq ˈwith their presence in the elections showed that they want to determine their own fate without interference of others.ˈ

The Iranian legislator underlined the necessity for the expansion of mutual cooperation between the two countries, and said, ˈThe parliamentˈs National Security and Foreign Policy Commission supports the development trend of bilateral relations, specially in parliamentary field.ˈ