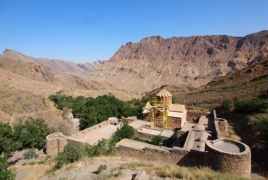 PanARMENIAN.Net – Iran is ready to launch works for restoration of 3 Armenian churches in the Tghmut river basin.

The Primate of the Armenian Diocese of Atrpatakan, Supreme Archimandrite Grigor Chiftchyan addressed the Aras economic zone department for protection of cultural and religious monuments with a request to observe the norms of Armenian church construction, Blagovest-Info reported.

Iran has 7 free economic zones, with the Republic’s government planning to use them for development of economy and tourism. Extensive grounds owned by Armenian Church, as well as 3 churches – St. Gregory the Illuminator, St. Sargis and St. George are situated in Aras.

As Iranian authorities are preparing for restoration, Armenian Eparchy suggested involvement of Armenian experts, with the offer to be taken into consideration.

As agreed with Armenian side, upon completion of restoration, the churches will be included into the Aras tourist routes.

Currently, there are 25 Armenian churches in Iran, with 11 of them operating mainly in Tehran, Tabriz and Isfahan.