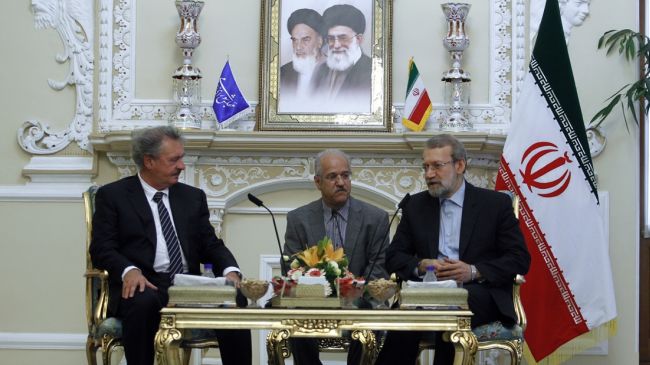 Iran’s Majlis Speaker Ali Larijani has called on European countries to act independently on the ongoing developments in the Middle East region.

“We expect Europe to play a more active role in important regional events by adopting an independent and constructive approach,” Larijani said in a meeting with Minister of Foreign Affairs and Immigration of Luxembourg Jean Asselborn in Tehran on Tuesday.

He added that a fatwa (religious decree) issued by Leader of the Islamic Revolution Ayatollah Seyyed Ali Khamenei prohibiting all weapons of mass destruction is the real support for Iran’s negotiations with the six major world powers on Tehran’s nuclear energy program.

In the fatwa, Ayatollah Khamenei said the Islamic Republic considers the pursuit and possession of nuclear weapons “a grave sin” from every logical, religious and theoretical standpoint.

Larijani said Majlis supports nuclear talks between Iran and the six powers on a logical basis which would focus on achieving positive and constructive outcomes.

Iran and the five permanent members of the UN Security Council – Russia, China, France, Britain and the US – plus Germany have been discussing ways to iron out differences and start drafting a final deal that would end the West’s dispute with Iran over the country’s nuclear energy program.

The Luxembourgian foreign minister, for his part, said the EU and US must know that Iran has the right to enrich uranium based on regulations of the Non-Proliferation Treaty (NPT).

Any failure to achieve a final agreement between Iran and the six countries would be a big mistake, Asselborn added.