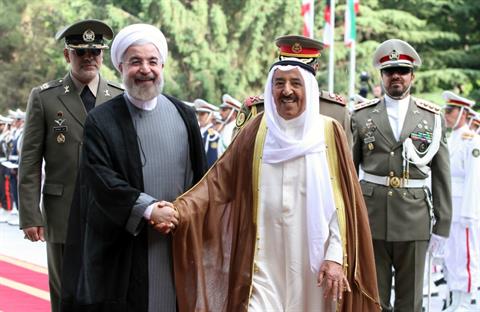 The minister’s comments to the state news agency KUNA late on Sunday came on the sidelines of a visit by Kuwait’s emir to Iran, the first by a ruler of the U.S.-allied Gulf Arab state since the 1979 Islamic revolution.

” Iran has large quantities of gas and Kuwait is in need of Iranian gas through cooperation between the two countries,” KUNA quoted Ali Saleh al-Omair as saying while in Tehran.

Kuwait also signed a contract to import liquified natural gas (LNG) from fellow Gulf state Qatar to help meet its energy needs to the end of 2014 in April.

Iran sealed a preliminary agreement to export gas to the Gulf state of Oman in March, after an agreement dating back to 2005 was revived during a visit of Iranian President Hassan Rouhani to the capital Muscat.

Demand for gas in the Gulf Cooperation Council (GCC) states is rising on the back of growing populations and an industrial boom.

Still, some analysts have said that Iran, which holds the world’s largest gas reserves, is unlikely to provide a quick supply fix for gas-hungry Gulf states, even if it reaches a deal with world powers over its nuclear programme and sanctions are lifted.

Iran has been prevented from exporting much of its natural gas because of Western sanctions over its contested nuclear programme.

Kuwait, home to a sizeable Shi’ite Muslim minority, is seen by some as a potential bridge between Iran and the Gulf Arab states, including the main power Saudi Arabia, with which relations remain strained, not least because of opposing stances over Syria’s civil war.