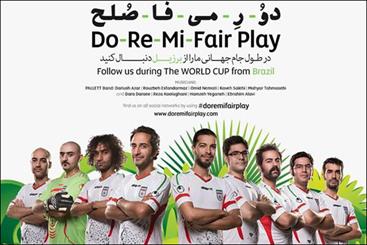 TEHRAN, June 2 (MNA) – A group of Iranian composers and musicians will travel to Brazil to participate in a program intended to promote global peace through the World Cup.

Dara Daraie is one of these groups. He provided some details to Mehr News of the project. “The musical project includes some of the country’s popular music bands such as Kaveh Salehi, Mahyar Tahmasbi, Omid Nemati, Rouzbeh Esfandarmaz, Reza Kolqani, Darioush Azar, Ebrahim Alavi, Hamzeh Yeganeh and myself in the framework ‘Do Re Mi Fair Play’ to a cultural adventure in Brazil,” he told Mehr News.

“The soccer-musical project will be part of a documentary film focused on peace and cultural activities to establish a dialogue between us and composers from countries in Group F,” he said.

“However, the project has not yet finalized; but it would suffice to say that it will focus on representation of Iranian culture and art in the world cup,” he added, and that “the initial plan for the documentary will be detailed in the few coming days. It is surprising enough that we ourselves could not predict how the cultural adventurism would turn out to be.”

Daraie predicted that the audience would enjoy influential documentary. “Given the wider scope of the world cup and the publicity it enjoys, cultural elements such as music would attract the public attention to Iranian national team,” he said.

The members of the project had already posed with Iran’s national kit. A poster of them reads “follow us during the world cup from Brazil” and “cultural adventurism for playing for global peace.”

The project reportedly was inspired by Lionel Messi’s refusing to recognize Iran in the aftermath of the Iranians’ swarming of his Facebook page to “do its quota to introduce Iran’s art and culture in the world Cup.”