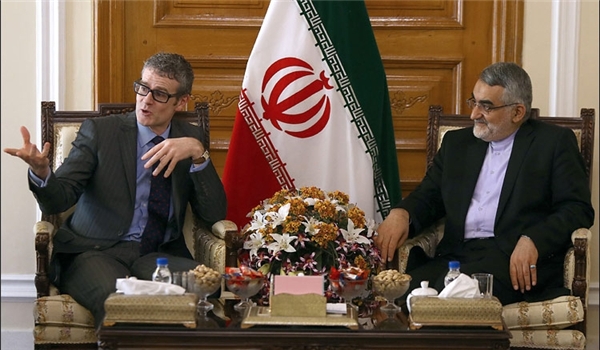 TEHRAN (FNA)- Iran and New Zealand officials in a meeting in Tehran discussed different ways to step up efforts to further expand relations and cooperation between the two countries.

The meeting was held between Chairman of the Iranian parliament’s National Security and Foreign Policy Commission Alaeddin Boroujerdi and Advisor to New Zealand’s Prime Minister Timothy Webster on Saturday afternoon.

Elsewhere, he referred to the ongoing nuclear talks between Iran and the Group 5+1 (the US, Russia, China, Britain and France plus Germany), and stressed that in case of a final deal, all sanctions against Tehran should be removed.

Webster, for his part, underlined his country’s enthusiasm for the further consolidation of relations with Iran, and said, “Any progress in the trend of nuclear talks (between Iran and the world powers) is appreciated by us, and New Zealand welcomes the trend of the negotiations and progress in them.”

New Zealand has had an embassy in Tehran since April 1975, making it the country’s longest-standing mission in the Middle East.

In April, Iranian Foreign Minister Mohammad Javad Zarif in a meeting with New Zealand’s Ambassador to Iran Eamon O’Shaughnessy underlined the need for the broadening of Tehran-Wellington ties.

“Iran and New Zealand’s favorable capacities for the all-out development of relations, specially in trade and economic sectors, are among the very fertile grounds for the development of cooperation between the two countries,” Zarif said during the meeting in Tehran.