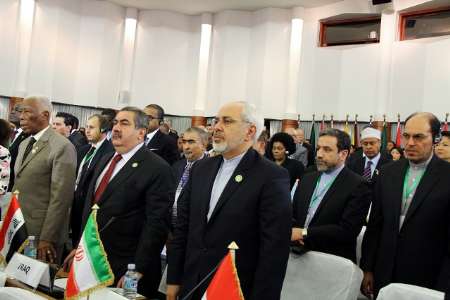 Algiers, May 31, IRNA – Iranian foreign minister said here Friday that although suppressive and unjust economic practices equal dictatorship and are discriminative, they are becoming a commonplace practice nowadays.

According to the dispatched IRNA reporter, Mohammad Javad Zarif made the comments his address at the joint NAM-G77 meeting on the occasion of the 50th anniversary of the latter group’s establishment in the presence of the Algerian foreign minister and the Bolivian foreign minister, the rotating head of the G77.

He welcomed Algeria’s initiative of holding the two huge international organizations’ meeting jointly and proposed deeper and stronger cooperation between the member countries of NAM and G77, which he said “have shared interests and incentives”.

He praised the great civilizational background of the 77 members of the G77 that come from different continents, are all developing countries, wish to leave behind the geopolitical limitations of the past half century, and have all spoken of their shared will to change to status the world order.

“Now, after the passage of 50 years since the establishment of the G77 there are stronger and more relevant reasons for its existence. Many of the challenges in the developing countries still remain unresolved and they have roots in the injustice that has long existed in the world scene,” he said.

Zarif said that many countries in both the NAM and the G77 are still entangled with inequality, injustice and poverty, which need to be uprooted.

“We are still also faced with the unacceptable trend of weakening the various aspects of development in the framework of multilateral programs. These conditions go along with cruel tendencies of some developed countries towards adopting decisions that affect the world economy outside the international multilateral frameworks,” he said.

The Iranian foreign minister said that one of the major concerns is the highly conditional and contradictory commitments of the developed countries in the field of development, emphasizing, “Resorting to oppressive economic approaches is as unjust and dictatorship, and they are unfortunately a commonplace practice today.”

Zarif ensured the G77 and NAM member states that the developing countries are now faced with a challenging future perspective and are in need of devising a long term working plan.

“With this in mind, if we would act harmoniously and united basic development will be achievable. In the years ahead in addition to the regular meetings and the intensified working plans, the G77 must face the very significant events ahead,” he said.

The Iranian top diplomat said that among such events there is the 2015 international development plan.

“Our group must actively, to the point, and at a multilayer manner harmonize itself with the development plans of the year 2015 and the years after that and attend the negotiations related to sustainable development and environment change. Keeping in mind the historical significance of these trends we need to shoulder our responsibilities so that those trends would lead to appropriate results for the long term development of the south,” he said.

Zarif said that these trends provide opportunities for choosing reforms in the world order, eliminating the most important obstacles in the way of development, and making sure about proper support for development and the capabilities that the international society offers us in this respect.

Zarif added, “in accordance with share basics, different responsibilities necessitate providing proper and sufficient political facilities for the developing countries to reflect the different realities in their countries and the different development priorities, without facing new obstacles facing them.”

The first ministerial meeting of the Joint Committee of Non-Aligned Movement and Group of 77, kicked off on Friday in Algiers under the chairmanship of Algerian Foreign Minister Ramtane Lamamra.

The Algeria Press Service (APS) reported that the meeting is held after the end of 17th Ministerial Conference of the Non-Aligned Movement (NAM) in coincidence with the celebration of the 50th anniversary of the creation of the Group of 77 (G-77).

The Joint Committee meeting is ˈmeant to boost our willingness and combine the efforts of our two groups to keep up with their responsibilities,ˈ Lamamra said.

He underlined the need for stronger synergies between the NAM and G-77.

ˈNAM must work to strengthen coordination with the G-77, for the opening of new spaces and gain new supports,ˈˈ Lamamra said.

The organization was founded in Belgrade in 1961 to advocate a middle course for states in the Developing World between the Western and Eastern blocs in the Cold War and to promote mutual interests.