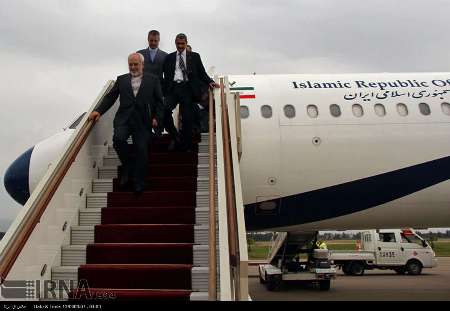 Zarif back home from NAM meeting

The conference which focused on the motto of strengthening solidarity for peace and progress started its work on May 28 in Algiers and wrapped up on Thursday by issuing final statement.

The draft statement was prepared in NAM coordination bureau in New York and experts from member countries considered their content on May 25-26, 2014 during expert meetings in Algiers.

The participants also agreed to hold a meeting next September on international disarmament.

The organization was founded in Belgrade in 1961 to advocate a middle course for states in the Developing World between the Western and Eastern blocs in the Cold War and to promote mutual interests.

In a meeting with his Yemeni counterpart Abu-Baker al-Qurba held on the sidelines of the meeting, Zarif asked for Yemen’s more serious efforts in pursuing the fate of the abducted Iranian diplomat there.

During his meeting with Algerian President Abdelaziz Bouteflika, the Iranian minister said that international community should try to end war and bloodshed in Syria.

Zarif stressed that Tehran believes the sole solution to the Syrian crisis is political approach and that Iran will try in this direction through interaction and cooperation with other countries.