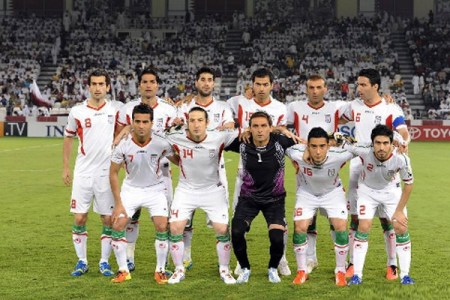 Tehran, May 30, IRNA – Iranian national football team drew yet another 1-1 equal in its 3rd preparation game in Austria camp with Angola.

At the end of the first half of the preparation game the Iranian side left the field 1-0 in its Angolan competitors’ favor.

The Portuguese Head Coach Carlos Quiroz team had during their first two preparation matches against Belorussia and Montenegro, too, gained no better result than two nil-nil draws.

The 2014 Brazil World Cup will being on May 13, featuring 32 teams and the Iranian team is grouped in the World Cup Group F together with Bosnia, Nigeria, and Argentina.

The Iranian national football team will after this game head for Tehran and be seen off for Brazil after obtaining briefing by the team coaches about the last moment techniques, tactics and tricks for their best possible performance.

The 2014 FIFA World Cup will be the 20th FIFA World Cup, an international menˈs football tournament that is scheduled to take place in Brazil from 12 June to 13 July 2014. It will be the second time that Brazil has hosted the competition, the previous being in 1950. Brazil was elected unchallenged as host nation in 2007 after the international football federation, FIFA, decreed that the tournament would be staged in South America for the first time since 1978 in Argentina, and the fifth time overall.

The national teams of 31 countries advanced through qualification competitions that began in June 2011 to participate with the host nation Brazil in the final tournament. A total of 64 matches are to be played in twelve cities across Brazil in either new or redeveloped stadiums, with the tournament beginning with a group stage. For the first time at a World Cup Finals, the matches will use goal-line technology.

With the host country, all world champion teams since the first World Cup in 1930 (Uruguay, Italy, Germany, England, Argentina, France and Spain) have qualified for this competition. Spain is the defending champion, having defeated the Netherlands 1–0 in the 2010 World Cup final to win its first World title. The previous four World Cups staged in South America were all won by South American teams.