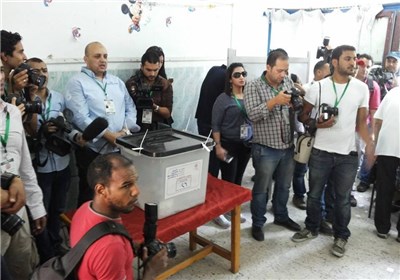 Sisi expected to win as Egypt heads to polls

TEHRAN (Tasnim) – Egyptians head to the polls in a presidential election that ex-army chief Abdel Fattah el-Sisi is expected to win easily.

The two-day vote, which starts at 0600 GMT on Monday, follows more than three years of political turmoil that has seen two presidents overthrown, mass protests, thousands killed in clashes, deadly attacks and a battered economy.

About 53 million people are registered to vote, AFP reported.

Sisi is expected to trounce his only rival, Hamdeen Sabbahi. The former army chief has spoken of the need for a strong leader who can restore stability in the Arab world’s most populous country and save the economy.

But true democracy will have to wait, perhaps for a couple of decades, Sisi has said. Instead, Sisi says he will work hard to restore the economy and fight “terrorism”.

The military and police are securing polling stations across the country, which has seen a surge in deadly attacks after Mohamed Mursi’s overthrow last July.

The presidential poll will be followed by parliamentary elections later this year.

Sisi’s sole election rival Sabbahi, a veteran dissident, has vowed to defend the democratic aspirations of the 2011 revolt.

“We swear to God that symbols of corruption and despotism (from the Hosni Mubarak era) will not return,” he said on Friday.

The April 6 youth movement, which spearheaded the anti-Mubarak revolt and whose leader has been jailed, has called for a boycott of the election.

Since Mursi’s overthrow, police have cracked down on the Muslim Brotherhood.