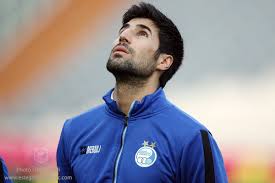 Iran remain hopeful over the fitness of Hashem Beikzadeh after the defender picked up a heel injury in a friendly with Montenegro on Monday.

The 30-year-old was withdrawn 16 minutes into the FIFA World Cup warm-up match, which produced Iran’s second consecutive goalless draw in the build-up to the tournament.

Carlos Queiroz’s men face two more friendlies before getting their campaign under way in Brazil, beginning with Angola on Friday, but Beikzadeh is not expected to feature.

The Iranian Football Association revealed in a statement that they hope the player will be ready for the tournament, but he would be subject to “special medical measures”.

The communication also suggested Beikzadeh could head to South America earlier than his team-mates for treatment in a bid to aid his recovery.

Iran have been drawn in Group F alongside Argentina, Bosnia and Herzegovina and Nigeria.