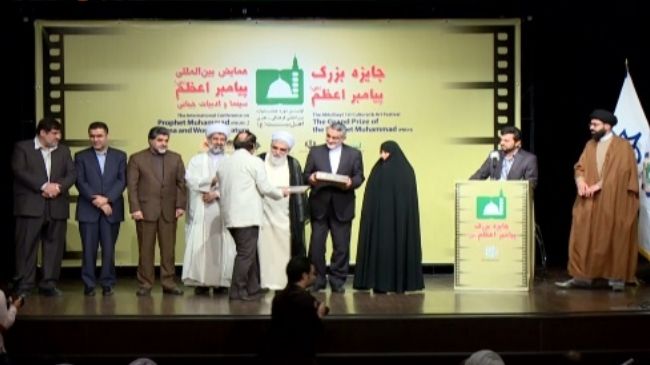 The first edition of international festival of the Great Prophet Muhammad (PBUH) Grand Prize has wrapped up during awards ceremony.

Iranian Majlis Speaker Ali Larijani along with a number of cultural officials and Islamic scholars attended the gala held at Tehran’s Vahdat Hall.

Seyyed Mohammad Reza Kheradmandan’s short film The Traveler grabbed the first Grand Prize of the festival in the related category.

The House of God directed by Fazlollah Tari, The Theft by Mohammad Farahani and Sheikh Hossein by Mohammad Mahmoudi were also among the winners of screen productions in different categories.

Several writers, including Yvonne Ridley from England; Zainab Muhanna from Lebanon; Mehdi Arab, Mohammad-Hassan Ghadiri and Ali Pakseresht from Iran; and Mohamed Boukrite from Algeria, were honored for their publications.

The festival was presented in several categories such as short film, short documentary film, animation, screenplay and book written in English on the lifestyle and traditions of the Islamic prophet Muhammad (PBUH).

Organized by the Ahl al-Bayt World Assembly, the event aimed to introduce and support the best cinematic and literary works that feature true face of Islam and the great prophet.

The Great Prophet Grand Prize was held from May 24 through 26.