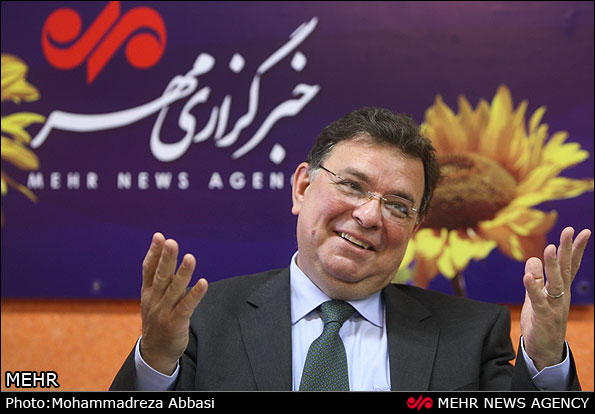 Brazilian ambassador says he would support Iran against Argentine

TEHRAN, May 28 (MNA) – Brazil’s Ambassador to Tehran has said he would wear Iran’s kit in Iran’s match against Argentine.

Santiago Irazabal Mourao, Brazilian ambassador to Tehran was in Mehr News Agency to talk to the staff about World Cup 2014 and other related issues.

He told Mehr News Sport correspondents that a documentary about public interest in Brazilian national soccer team in an Iranian southwestern city of Abadan had created excitement among Brazilians, inciting a fuss about the city’s FC Nafte Abadan soccer team.

Mourao, who is a staunch supporter of Pele, Brazilian legend, said that he would support Iran against Argentine, Brazil’s traditional rival, with wearing Iran’s national soccer kit.

“We all are happy to host the World Cup in Brazil. Brazil is the land of soccer and people love football, and the world knows well this,” Mourao said, “especially the World Cup which is specifically important for us.”

“As you know, it is the first time in a world cup that all former world cup champions are present in the event; Germany, Spain, Netherlands, Italy, and Argentine [not mentioning Uruguay, of course]; of course if Argentine reaches to final. They should face Iran and perhaps they would not,” said the ambassador.

“We expect to be winner of our fist game to break the line of draws in the first games in world cups,” he added.

“Iran had a difficult path to the World Cup 2014. They showcased their power against South Korea to be among 32 teams. They have a fighting spirit. We would welcome Iran with open arms and would be happy to be a good host for Iranians,” Mourao said.

“Iran is in a tough group, with Argentine, Nigeria, and Bosnia and Herzegovina. The day Iran won South Korea to go up to the world cup; I was here in Tehran and closely see the public celebrating the feat on streets. It was a felicitous event,” added he, “the phenomenon is common to other places, especially in Rio and Maracana. I have not been to these cities, but know the excitement.”

“An Abadan team, Sanate Naft, wears Brazil’s kit or something similar. Brazil’s Globo TV aired a documentary about Iran, which featured this Abadan’s team, which had created excitement and fuss among Brazil’s public,” said the ambassador, “I am looking forward to visit this city!”

“Carlos Queiroz is highly skilled and informed manager. Under his lead, Iran shined in the qualification matches. He had worked to boost the players and is highly motivated himself,” he added.

“It is not surprising that a Brazilian plays in Iran’s premiers. I know Edinho. He plays for Kerman’s FC Mes. Many Brazilians have changed nationality and played for the second country in national level,” he told Mehr News Sport correspondents.