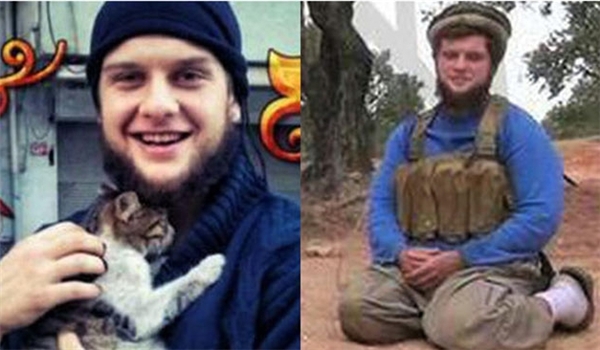 American citizen carries out suicide bombing for Al-qaeda in Syria

TEHRAN (FNA)- A United States citizen working in Syria with a militant group backed by Al-Qaeda has conducted a suicide bombing there on Sunday, American officials said.

The suicide attack first surfaced on Tuesday in Twitter messages from the al-Nusra Front, a terrorist group in Syria aligned with Al-Qaeda in the multi-national war in Syria, Al-Alam reported.

American officials, speaking on the condition of anonymity because intelligence matters were involved, declined to identify the American or provide any information about him. NBC News first reported that American government officials had confirmed the bomber was an American.

Syrian opposition social media sites reported that the American went by the name Abu Huraira al-Amriki and carried out the suicide truck bombing in the Northern province of Idlib.

A photo circulated on extremist social media accounts showed a smiling young man who was said to be the bomber. He had a blond beard and was holding a cat to his chest.

A militant reached through Skype near the bombing site confirmed the attack and said he had seen the American before the bombing but had not spoken to him and did not know where he was from.

“I know he was an American, had an American passport and that he was with the Nusra Front,” said the activist, who gave only his first name, Ahmed, for fear of retribution.

Extremist groups in Syria with ties to Al-Qaeda have been trying to identify, recruit and train Americans and other Westerners who have traveled there to get them to carry out attacks when they return home, according to senior American intelligence and counterterrorism officials.

These efforts, which the officials say are in the early stages, are the latest challenge that the conflict in Syria has created, not just for Europe but for the United States. The war has become a magnet for Westerners seeking to fight with the terrorists against the Syrian army.

American intelligence and counterterrorism officials say more than 70 Americans have traveled to Syria, mainly to fight for one of the hundreds of terrorist groups combating the Syrian government.