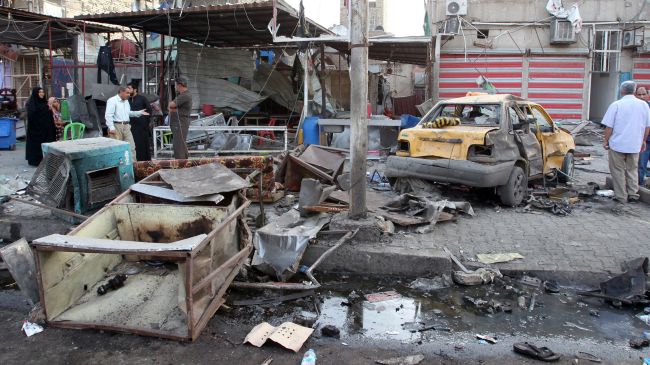 74 killed in fresh wave of attacks across Iraq

At least 74 people have been killed in a series of attacks across Iraq, including the capital, Baghdad, officials say.

The officials said on Thursday that the death toll from the new wave of attacks claimed the lives of 74 people a day earlier. Wednesday became the bloodiest day in the country in more than seven months.

In the deadliest incident, a bomber exploded an explosive-laden vehicle in the Shia neighborhood of Kadhimiyah in north Baghdad, killing 16 people and injuring 52 others.

Some 20 other people were killed in three car bomb blasts in the Amin, Sadr City and Jihad districts near the capital.

Shootings and bombings also killed four others in and around Baghdad.

In the northern city of Mosul, at least 21 people, including 14 soldiers, were killed in twin car bombs.

Eight people also died in attacks in Kirkuk and Salaheddin provinces, both north of the capital, while three others were killed in shelling in the militant-held city of Fallujah in Anbar Province.

No group has yet claimed responsibility for the attacks, but Iraqi officials normally blame militants belonging to the terrorist group, Islamic State of Iraq and the Levant, for such atrocities.

Official figures show that more than 1,000 people, mostly civilians, were killed and nearly 1,400 others injured in violent attacks across Iraq in April. According to the United Nations, almost 9,000 people were killed in 2013.