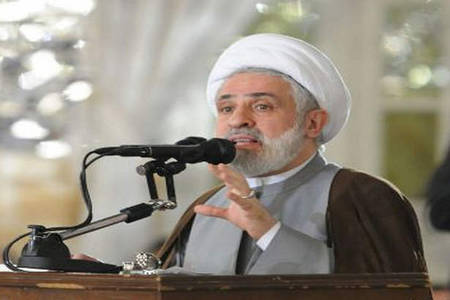 Beirut, May 28, IRNA – Today resistance draws effective options for construction of region’s future, which differs greatly with what arrogance and Israel have in mind, said deputy secretary general of Lebanese Hezbollah here on Tuesday.

Sheikh Naeil Qassem who was speaking at a ceremony in Beirut noted that the approach of the resistance is fully defined, and its status in Lebanon and the region is quite clear despite certain double-sided comments heard today.

“We are familiar with the plots hatched by the arrogance for the region, for implementing which they even mobilizes the international community, and we present plans to counter them, and our plans are thanks God successful, while theirs are defeated,” he reiterated.

Sheikh Naeim Qassem said that the reason why the plans designed by the resistance front in the region are successful is that they are well-intentioned, are obeying of God’s commands, and they are in line with fighting for God’s sake, Jihad.

“The entire invasions and attacks against the resistance have been futile and faced defeat though, since they have been unjust, cruel, and deviation (from the Right Path),” he added.

The deputy secretary general of Hezbollah emphasized that the resistance has today achieved very precious experience in the fields of belief, Jihad, military expertise, social services and political work, and in each field that it has entered, relying on the grace of God and the spirit of resistance, it has also finished the job quite successfully.

“We are celebrating this year the 14th anniversary of May 25th, 2000, when most parts of the occupied lands in the south of Lebanon were liberated from the humiliating occupation of the Zionist enemy with no preconditions.

“I once again emphasize that resistance is an indispensable part (of our lives), like the food the water or the milk that are infants are fed with, and the role and significance of the great victories achieved by the resistance will never be wiped off the minds,” he said.