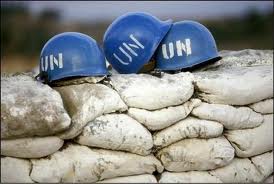 Tehran, May 28, IRNA — UN Secretary-General Ban Ki-moon in his message on the International Day of United Nations Peacekeepers, May 29, 2014, said today, over 116,000 UN personnel from more than 120 countries serve in 16 peacekeeping operations.

According to a press release issued by the UN Information Center (UNIC), the full text of his message reads:

Today, more than 116,000 UN personnel from more than 120 countries serve in 16 peacekeeping operations. At great personal risk, these military, police and civilian personnel help stabilize communities, protect civilians, promote the rule of law and advance human rights. Last year, 106 Peacekeepers perished carrying out their duty under the UN flag, bringing the total number of lives lost in the history of peacekeeping to more than 3,200. We mourn the passing of every one of these courageous individuals. We grieve with their friends and families and we recommit ourselves to ensure that their contributions to the cause of peace will never be forgotten.

United Nations peacekeeping is modernizing to ensure that it can tackle tomorrow’s peace and security challenges. It is deploying new technologies such as unarmed, unmanned aerial vehicles, refining its practices to better protect civilians, and boosting the representation of women among its ranks while strengthening its partnerships with regional organizations. The United Nations is improving logistics and administrative practices, strengthening infrastructure and taking other steps to harness the power of our personnel. Our goal is to ensure that peacekeeping is a cost effective, valuable investment that brings enormous benefits and, above all, saves lives.

Over the past year, the Security Council has established two peacekeeping operations – in Mali and the Central African Republic — again highlighting its trust in UN peacekeepers to take on tough challenges. The UN Mission in the Democratic Republic of the Congo helped the government defeat the M23 rebels that had preyed upon civilians in the country’s East. In South Sudan, for the first time in UN peace-keeping history, our peacekeepers systematically opened the gates of their bases to tens of thousands of civilians, saving their lives and protecting them from either government or opposition forces. In an historic breakthrough, a woman was named the first female Force Commander of a UN peacekeeping operation.

Earlier this month, the Security Council established the ˈCaptain Mbaye Diagne Medalˈ, named after an unarmed Senegalese peacekeeper who lost his own life after saving as many as a thousand people during the 1994 genocide in Rwanda. This medal will honour UN personnel who demonstrate exceptional courage. Let us all commit to following the selfless example of Mbaye Diagne and other fallen heroes, as we work together to help our blue helmets be a force for peace, a force for change, and a force for the future.ˈ