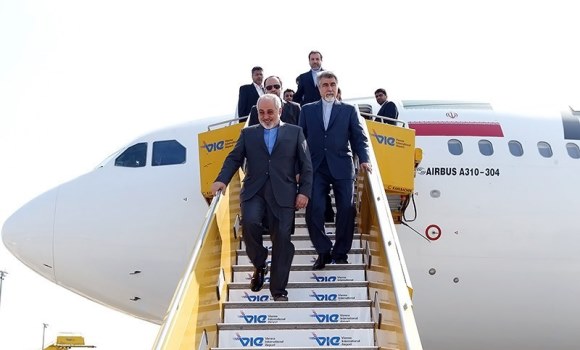 Zarif to confer with Ashton on nuclear issue in Istanbul

Istanbul, May 26, IRNA – Foreign Minister Mohammad-Javad Zarif said upon his arrival in Istanbul on Monday that during his stay in the city he is to confer with the EU Foreign Policy Chief Catherine Ashton on nuclear issue.

Speaking to reporters, he said he is to attend foreign ministerial meeting of the Non-Aligned Movement in Algeria and during his stopover visit to Istanbul he would confer with the EU foreign policy chief.

It is necessary to make clear that Ashton and her assistants at the European Union will be present in the meeting and this is not a meeting with G5+1, he said.

The two sides will discuss latest developments on nuclear dispute and positive steps are expcted to be taken to this effect.

A group of officials from Iranˈs foreign ministry are accompanying Zarif.

He stressed the need to find a compromise solution in the ongoing talks between Iran and the six governments aimed at an end to a decade-long stand-off over the nuclear dispute.

Zarif who was speaking to IRNA correspondent prior to his departure to Istanbul, said there are two ways to resolve differences. One is that one party gives up its rights and totally accepts demands of the other party while, the other way requires both sides to bring their views closer via negotiations to find a compromisory settlement.

Asked to comment on the latest round of nuclear talks in Vienna which made little progress, Zarif said he did not think that the nuclear talks have failed.

Top diplomats from Iran and the six governments – known as the P5+1 – met in Vienna two weeks ago to discuss drafting the Comprehensive Agreement. But they failed to do so because of some differences.

Iran’s top diplomat said that an interim deal between Iran and the West struck on November 24, 2013, following hundreds of hours of bilateral and multilateral, official and unofficial talks.

Zarif reiterated that Iran will not cross its redlines during the talks, stressing that the other side should be assured that Iran’s nuclear program would remain peaceful forever.

ˈIn the next round of talks we may be able to remove a number of obstacles or face new obstacles,” Zarif said. He noted that a lot more efforts are needed to reach an agreement.