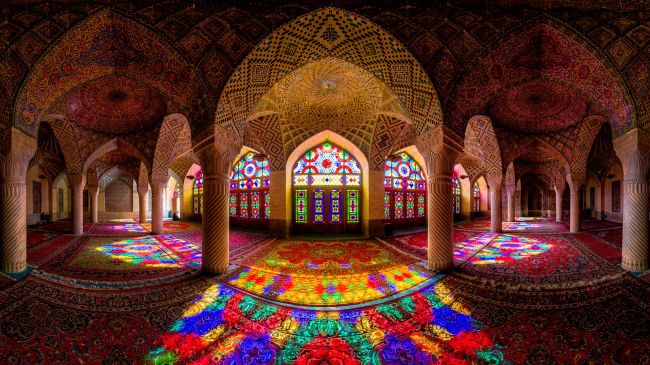 The art of mosque architecture in Iran

Most countries have their very own unique art of architecture, especially countries with an ancient civilization such as Iran.

The architecture of mosques in Iran varies from one region to another depending on culture, heritage and the resources available. Each mosque has different styles of tile work, unique color systems and symbolic patterns; however, there are a few common elements common to most of them.

One such elements is the “Mehrab,” a semicircular niche in the wall that faces the qibla, the direction of the Ka’aba in Mecca, to whose direction Muslims pray. Another common element that all mosques share is the pools situated outside them; the water in the pools symbolizes pureness and cleanliness.

The Islamic architectures of mosques have a symbolic significance. Some common features of Islamic mosques are the minarets and domes. The minaret is a tall tower situated at one of the corners of the mosque that provides a visual and a vocal point that are used to call on people for prayers. Domes are another signature of Islamic architecture, symbolically representing the vaults of heaven.

The art of tile working in Iran blossomed in the Islamic period. The amazing tile work features beautiful colors, floral displays and calligraphy. The calligraphy is linked to geometry as the proportions of the letters are all governed by mathematics.

Masooleh is a village in the north of Iran in the Gilan Province. Settlements in this area date back to over one thousand years ago. The architecture of this village is unique. One of the most fascinating features of Masooleh is the structure of its interconnected buildings.

The village was constructed with a sewage system and windows with double glazing from the beginning. The houses are earthquake-proof and are all connected through underground tunnels. Courtyards and roofs both serve as pedestrian areas similar to streets. Commute in the village is simple as Masouleh does not allow any motor vehicles to enter the village.

Iran’s Science and Technology Museum has gadgets on display that were based on state-of-the-art technologies of their own times. The museum was established to promote science and scientific spirit among different groups in society.

The museum has reconstructed inventions of historic scientists so that people can have a better insight into what each invention was capable of and was designed for. There are over 60 pieces on display at a time, with around 150 other displays which change periodically.

The Kandovan Village is located in Iran’s East Azerbaijan Province. It is a small stone village that has become a famous tourist attraction. The village is known for its architecture and scenery.

The houses are carved in the rocks and are shaped like beehives. The history of the village goes back to over 700 years ago; however, the houses are still inhabited by the locals. The houses are energy sufficient, which means they need minimal supplemental heat during the winter and they remain cool in the summer.