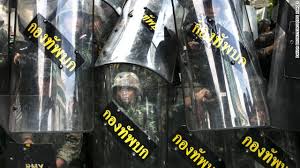 “To restore peace and order in the country and for sake of unity, the king appointed General Prayut Chan-O-Cha as head of the National Council of Peace and Order to run the country,” according to a royal command seen by AFP on Monday.

Prayut, who seized power four days earlier and has assumed extensive powers over the South-East Asian nation of 67 million was formally be appointed in a ceremony in Bangkok.

The monarchy headed by the revered but ailing king, 86-year-old Bhumibol Adulyadej, commands great respect among many Thais.

His blessing has traditionally been a key step in legitimising the recurring military takeovers that have taken place in Thailand, which has now seen 19 actual or attempted coups since 1932.

Army spokesman Sirichan Ngathong indicated the king, who is yet to make a public statement on the coup, would not be present for the ceremony.

More than 1,000 anti-coup demonstrators marched through Bangkok on Sunday with dozens of demonstrators facing off against lines of armed soldiers, as the junta warned of a crackdown if the protests continued.

The junta on Saturday announced that it had placed all law-making authority in Prayut’s hands.