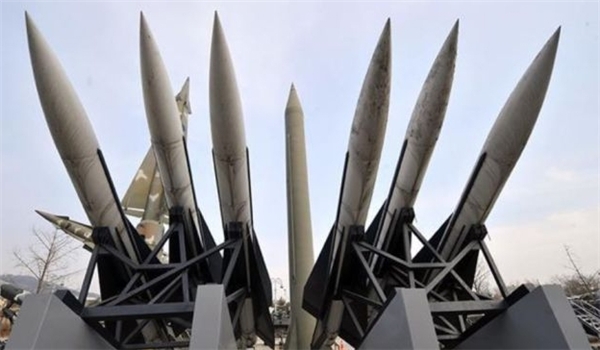 TEHRAN (FNA)- The Israel Defense Forces (IDF) Spokesperson Yoav Mordechai on Saturday posted on his Twitter account a supposed image of some of the 100,000 missiles Hezbollah that Tel Aviv claims are aimed at Israeli cities, but to much surprise the photo shows Korean missiles.

The photo, which appears to be from AFP/Getty Images, was used on Mordechai’s tweet marking the 14th anniversary of the Israeli pullout from Lebanon. “#Israel troops left #Lebanon 14yrs ago. Now #Hezbollah terrorists have rearmed, w/100,000 missiles pointed at #Israel,” his tweet read. However, the tweet did not mention that the photo is illustrative only.

Indeed, according to the photo caption published by the French news agency AFP, the missiles depicted are mounted on a Korean War memorial in Seoul.

But to much surprise, the IDF spokesperson defended his mistake, and told the Israeli daily Haaretz that “this is strictly an illustrative photo which does not detract from the gravity of the threat posed by Hezbollah’s armament in recent years”.

Mordechai did not respond to Haaretz’s question of whether he or the IDF have an agreement with a news agency allowing them to publish the photo.

He did not even speak of the hundreds of the nuclear warheads that Israel has as the only nuclear-armed regime in the Middle-East or the way other regional nations feel when a regime which has been at war with several neighboring nations all throughout the last 6 decades has over 200 to 400 nuclear warheads in their vacinity.