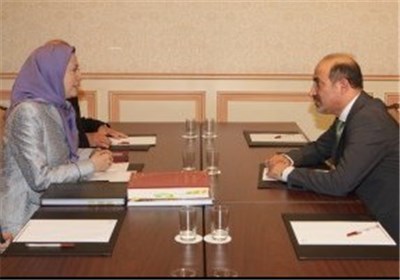 Iranian Deputy Foreign Minister for Arab and African Affairs Hossein Amir-Abdollahian slammed the meeting saying it was a “grave mistake” made by Jarba.

The MKO fled Iran in 1986 for Iraq, where it received the backing of Iraq’s executed dictator Saddam Hussein and set up a camp near the Iranian border. The terrorist group also sided with Saddam during Iraq’s eight-year war on the Islamic Republic in 1980-1988.

The MKO is listed as a terrorist organization by much of the international community and is notorious for committing numerous terrorist acts against Iranians and Iraqis.

Elsewhere in his remarks, Amir-Abdollahian referred to the upcoming presidential election in Syria and said Jarba’s meeting revealed his political character.

“In our opinion, when it comes to politics, Ahmad Jarba is a weak person … he is the most inappropriate person for the future of Syria,” the Iranian official stated.

“He does not know who to meet in his foreign meetings,” he added.