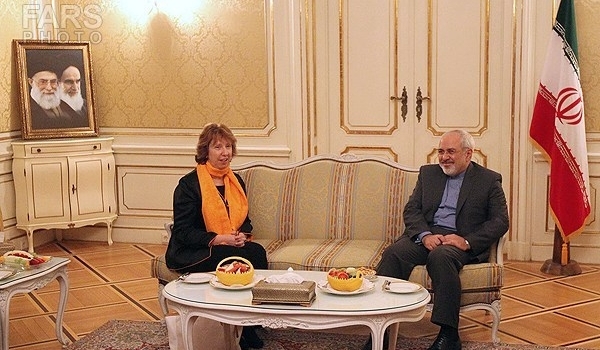 Iran foreign minister to meet with EU’s Ashton in Istanbul

Iranian Foreign Minister Mohammad Javad has travelled to Turkey to meet with EU foreign policy chief, Catherine Ashton, ahead of the next round of nuclear talks between Tehran and the P5+1 group.

On Monday, Zarif left Tehran for the Turkish city of Istanbul, where he will hold two days of talks with Ashton over the progress of the ongoing nuclear negotiations between Iran and the five permanent members of the UN Security Council – Russia, China, France, Britain, the United States – plus Germany.

The next round of nuclear discussions between Tehran and the P5+1 is slated to begin in the Austrian city of Vienna on June 16. Ashton represents the six states in their talks with the Islamic Republic.

Tehran and the P5+1 have been discussing ways to iron out differences and start drafting a final deal that would resolve the West’s decade-old dispute with Iran over the country’s nuclear energy program.

The two sides wrapped up the fourth round of nuclear talks in Vienna on May 16.

Tehran says there has been no tangible progress in writing the draft text of a comprehensive agreement.

However, Araqchi has dismissed notions that talks with the P5+1 have reached a deadlock, saying, “The negotiations continue, although we have not achieved a tangible progress yet – which is not unusual.”

In November 2013, the two sides signed an interim nuclear deal in the Swiss city of Geneva that took effect on January 20.