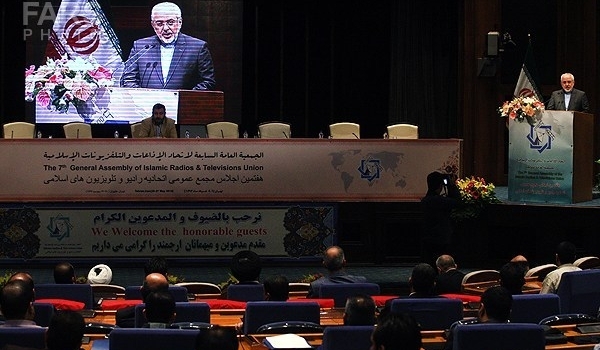 Addressing the Seventh General Assembly meeting of the Islamic Radios and Televisions Unions on Monday, Zarif lashed out at the West and Israel for their attempts to spread Islamophobia and Iranophobia in the region and the world.

“The Islamic Republic has targeted the Zionists’ Islamophobia and Iranophobia propaganda campaign for turning Iran’s (nuclear) case into a security issue, and it has somehow stopped their heavy, long-term and horrible investment in this regard,” Zarif said.

“Iran’s approaches have taken calm away from Netanyahu and at the same time established Iran’s nuclear rights by not accepting any excessive demands,” he underlined.

Iran and the Group 5+1 (the five permanent UN Security Council members plus Germany) sealed a six-month Joint Plan of Action on November 24 to lay the groundwork for the full resolution of the West’s decade-old dispute with Iran over the latter’s nuclear energy program.

In exchange for Tehran’s confidence-building bid to limit certain aspects of its nuclear activities, the Sextet of the world powers agreed to lift some of the existing sanctions against Tehran and impose no nuclear-related sanctions on Iran during the six-month period. The two sides are now in talks to compile a final comprehensive deal to settle their differences over Iran’s nuclear program.

During the talks Iran managed to build confidence and the country’s capital witnessed visits by different European officials and businessmen, foiling enemies’ plots to isolate Tehran.