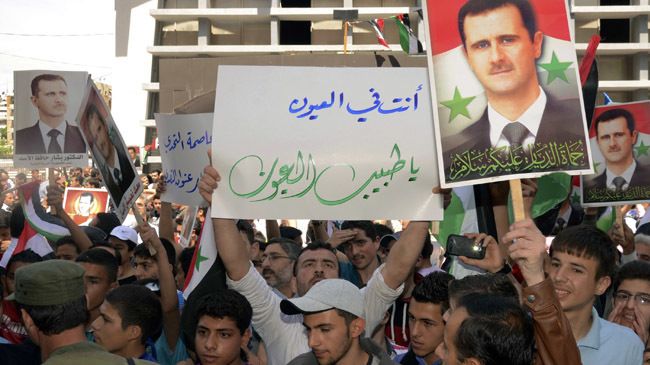 Syrians in Iran to vote for president on May 28

Supporters of Syrian President Bashar al-Assad take part in a rally in the city of Aleppo on April 29, 2014 ahead of the June 3 presidential election

Syrian nationals in Iran are set to go to the polls this week to elect their country’s next president.

The Syrian nationals will cast their votes in two ballot boxes in the country’s embassy in Tehran on Wednesday.

Syria’s presidential election will start on June 3. Syrians living abroad are set to vote on May 28.

Damascus says it will hold the vote despite the foreign-backed militancy that has plagued the Arab country for more than three years.

Last month, the Syrian government dismissed Western and opposition accusations regarding the presidential election, saying that it is planning to hold a free and transparent vote.

The country has been gripped by deadly violence since March 2011. According to some reports, more than 160,000 people have been killed and millions displaced due to the turmoil.

The Western powers and their regional allies — especially Qatar, Saudi Arabia and Turkey — have been supporting the militants operating inside Syria.