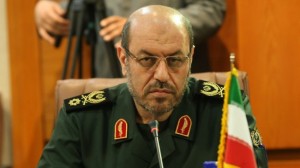 TEHRAN (FNA)- Iranian Defense Minister Hossein Dehqan condemned US interference in the domestic affairs of other countries, and asked for just and fair rules in international relations based on mutual respect.

Speaking on the sidelines of the Third International Security Conference in Moscow on Friday, Dehqan said what was seen in the confab was concerns and dissatisfaction of all countries with the interference of powers in the domestic affairs of other states.

Dehqan said the US interference in the domestic affairs of other countries is among important factors contributing to regional and world instability.

He said to confront this inappropriate approach, all countries should try to bring just and fair rules to govern international relations based on mutual respect.

During his visit to Moscow, the Iranian defense minister also met with his Azeri counterpart Zakir Hasanov where both sides called for expansion of the bilateral relations.

Dehqan said expanding relations with Baku carries a special weight for Iran as Tehran’s foreign policy lays much stress on developing ties with the neighboring states.

General Hasanov, for his part, called for both sides’ efforts to accelerate implementation of mutual cooperation.

Hasanov expressed dissatisfaction with double standards in international relations as well as inefficiency of the Europe Organization for Security and Cooperation in settling the Karabakh dispute.

The Conference started work on Friday and ended on Saturday.

More than 300 representatives from military bodies and international organizations as well as experts and officials from more than 40 countries took part in the 2-day confab.

The latest developments in the Middle East and North Africa as well as color revolutions were among main issues in the confab.

Ukraine’s developments and expansion of US missile shield in Europe were also discussed in the event.