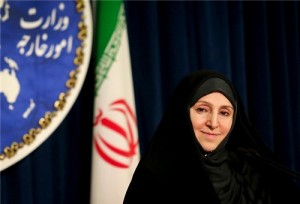 Marziyeh Afkham censured the terrorist bombing against a group of pilgrims who were on their path to the town of Kadhimiya north of Baghdad on Thursday.

At least 10 people, including children, lost their lives and 25 others suffered injuries after a car bomb detonated near a group of pilgrims on their path to Kadhimiya.

Afkham said the massive turnout of the Iraqi people in the country’s recent parliamentary election has led to the further isolation of terrorism, adding that the Iraqi nation is determined to maintain national unity and political cohesion.

She further condemned a mortar attack by foreign-backed Takfiri militants on an election campaign rally in southern Syria.

Iran’s foreign ministry spokeswoman expressed sympathy with the families of the victims and said those who support and arm extremist groups in Syria are responsible for the tragedy.

In the first attack to target a campaign event, a mortar shell slammed into a tent packed with supporters of President Bashar Assad, killing 39 people and wounding 205 others, Syrian state TV said Friday.

UN Secretary-General Ban Ki-moon condemned the mortar attack and reiterated his opposition to the indiscriminate use of any weapons by any party against civilians.