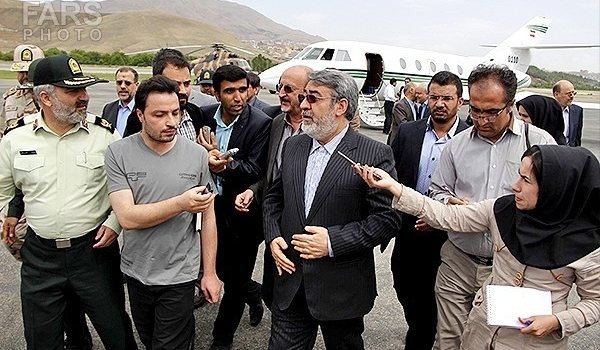 Minister: Iran not to withdraw from rights in N. talks

TEHRAN (FNA)- Iranian Interior Minister Abdolreza Rahmani Fazli stressed the country’s astonishing progress in different scientific and industrial fields, and said Tehran is serious about defending its nuclear right in the talks with the world powers.

“We will never withdraw from the materialization of the nation’s rights in the nuclear negotiations and we will come to materialize Iran’s goal of becoming a role model at the global scale,” Rahmani Fazli said, addressing the Iranian Armed Forces in the Western city of Sanandaj on Saturday.

Emphasizing that Iran has reached the peaks of science and technology, he said, “What has put the country on the path of progress is Iran’s security, tranquility, might and development.”

“Now we are under such conditions that the enemy has shown a new retreat and has been forced to negotiate with us,” Rahmani Fazli said.

He described Iran as the decision-making side in the talks with the global powers, and said, “Today, all the western states invite us to (establishment of) trade and economic ties and political relations in the end.”

On November 24, Iran and the five permanent United Nations Security Council members plus Germany sealed the six-month Joint Plan of Action to lay the groundwork for the full resolution of the West’s decade-old dispute with Iran over its nuclear energy program.