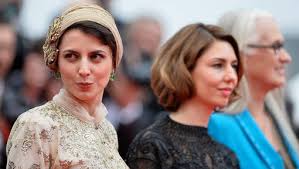 An Iranian actress who kissed the 83-year-old president of the Cannes film festival on the cheek has apologised to her country, after a photo of the red carpet incident caused outrage.

Leila Hatami, the Iranian actress who angered authorities in Iran by kissing the Cannes film festival’s president on the cheek, has apologised to her country.

“I am so sorry for hurting the feelings of some people,” she wrote in a letter to Iran’s cinema organisation, and reported by the state media agency.