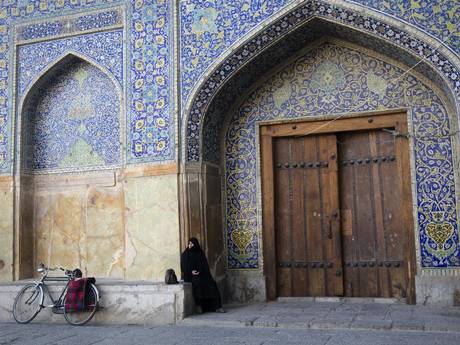 Beyond the vast, sun-drenched courtyard of Isfahan’s Imam Mosque and its intricate, 17th-century tiled stalactites, an audience of four Belgians and a Polish woman listens patiently to a young Iranian cleric.

Dressed in robes and Shia turban, he explains in flawless English the differences between Islam’s two dominant sects and why the religion tells women to cover their hair. Smiling, the Belgians then have photographs taken with the theologian.

“We want to try and establish relationships so more people visit,” Mostafa Rastegar, from a seminary in the holy city of Qom, said after his talk.

Foreign visitors to Iran are the most visible effect of President Hassan Rouhani’s drive to mend ties with the US and Europe, an influx that one his deputies said generated as much as £3bn for the sanctions-hit economy over the past year. International hotel chains are plotting a return to Iran for the first time since the 1979 Islamic revolution, while European airlines are restoring links with Tehran.

Between 21 March and 20 April, the first month of the Iranian year, 4,594 foreign tour groups visited Iran, more than double the number that arrived in the same period last year, said Morteza Rahmani-Movahed, deputy of the government’s Tourism and Heritage Organisation. Iran wants to remove or ease visa requirements for 12 countries to draw more visitors, Intelligence Minister Mahmoud Alavi has said.

Austrian Airlines resumed direct flights to Tehran in March and Iranian officials have been in talks with Alitalia to increase frequency on its routes, the official Fars News Agency has reported.

“The stability of the political situation will have an important impact on the economy,” Mr Rahmani-Movahed said. “There has to be a relationship with the rest of the world.”

A moderate cleric, the 65-year-old President Rouhani has promised a rapprochement with the world powers that tightened economic sanctions on Iran under his predecessor, Mahmoud Ahmadinejad, over the country’s nuclear programme. Among his first pledges after taking office in August last year was a commitment to improve the quality of the tourism industry and draw more foreign travellers.

Tourism is a major part of Iran’s “economy of resistance”, Intelligence Minister Alavi has said, referring to Supreme Leader Ayatollah Khamenei’s programme to make the national less vulnerable to international sanctions over its nuclear plans.

Travel and tourism accounted for 6.3 per cent of Iran’s £286bn economy in 2012, according to an estimate by the World Economic Forum in a report last year.

Taking into account Shia pilgrims and visitors from neighbouring countries such as Azerbaijan, he said more than four million overseas visitors toured Iran from March 2013 to March 2014, each accounting for an estimated £713 of revenue, according to a report by the official Islamic Republic News Agency. In 2012, there were 3.8 million international tourist arrivals, according to the World Bank.

Lonely Planet said appetite for information about Iran has prompted the publisher to dedicate a chapter on the country in the update to its Middle East travel guide.

In the courtyard of the Abbasi Hotel in Isfahan, south of Tehran, packs of retirement-age Europeans sit among quince trees and date palms. Well-heeled Iranian teenagers take selfies against the backdrop of a restored 350-year-old caravanserai, once an inn for merchants passing along the Silk Road.

“This time last year, about 40 per cent of our guests were foreigners,” said Bakhtiar Haddadi, general manager of the Abbasi, said from his office overlooking the courtyard. This year “80 per cent of are from overseas”.

Mr Haddadi, who has managed the hotel for 14 years, said all 225 rooms were fully booked until June, with the exception of a few large suites kept empty for high-ranking guests. The hotel’s most expensive room, with bullet-proof windows and reproductions of Safavid-era Persian floral motifs, was once for the exclusive use of the deposed Shah of Iran and costs about £160 a night.

“Thankfully with the election and the changes that have taken place, we’ve seen a thawing of the ice,” Mr Haddadi said. “Negative perceptions of Iran are changing.”

Most tourists arrive during two peak seasons, April to early June and September to October, as part of package tours according to officials.

Many follow a route that takes them from Isfahan to the ancient Zoroastrian centre of Yazd and then on to the southern city of Shiraz, close to the 2,500-year-old ruins of the Achaemenid empire. The city is flanked by imposing craggy cliffs from where looms the granite-clad facade of a five-star hotel.

The Shiraz Grand opened six months ago to reap the rewards of a surge of foreign visitors. In its lobby Austrian tourist Edith Howorka, 61, had just returned from touring the palace of Darius the Great. She said her experience of Iran had so far been “absolutely positive”.

“I like to visit countries with a very interesting culture and history,” said Ms Howorka. “But during Ahmadinejad’s time it would never have struck me to come here. I would have felt like an enemy of the country.”

Younes Yahya, manager of Isfahan’s five-star Kowsar Hotel, the rival of the Abbasi, said more needs to be done to help different parts of Iran’s economy cater to visitors.

“Right now different sectors act independently of each other and do not coordinate. We need a consortium for businesses related to the tourism industry,” he said

London teacher Ruth Standing, 33, who was travelling independently, said at a teahouse filled with trinkets in Isfahan that more could also be done to make it easier for tourists to prepare for a visit to Iran, such as information on visas.

“It was so difficult for me to get a visa,” said Ms Standing. “I was surprised to see so many tourists when I finally arrived here.”

4 million Overseas visitors toured Iran in the year from March 2013.

£3bn Contributed to the Iranian economy for foreign tourists.

6.3% Proportion of the economy accounted for by travel and tourism in 2012.

£160 For a night in the hotel room once reserved for the Shah.