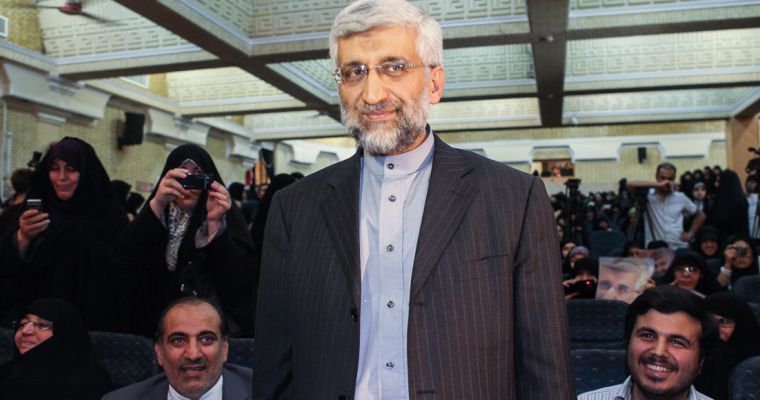 After weeks of hardline challenges to his strategy for nuclear negotiations, President Rouhani appears to have turned the tide this week.

Saeed Jalili (pictured), the hardliner who was Iran’s lead negotiator in the Ahmadinejad years, said, “All must support the negotiating team to reach our aim. The nuclear discussions are above and beyond narrow political and factional debates.”

Earlier this month, Jalili was featured at events that cast doubt on the talks, including one which brought a loud counter-protest from students who also demanded the freedom of political prisoners.

Iran and the 5+1 Powers (US, Britain, France, Germany, Russia, and China) held a fourth set of talks on a comprehensive nuclear agreement last week. A fifth set is scheduled for June 16 in Vienna.

The two sides are seeking a deal before an interim Joint Plan of Action expires on July 20.

Jalili’s shift followed a call on Monday by the head of Iran’s military, Hassan Firouzabadi, for all Iranians to “build the country and assist the administration”. The message appeared to rebuff the Revolutionary Guards, who have been indirectly sniping at the discussions through declarations of Iran’s strength and US weakness and dishonesty.

Presidential adviser Hesamodin Ashna added a telling note on his Facebook page the next day, “What if Firouzabadi’s comments were not a hint but an order?”

Still, despite the indication of a command from the Supreme Leader, the pressure on Rouhani has not been fully released.

The Iranian nation and Supreme Leader of the Islamic Revolution are all trying to make sure that the Iranian nation’s rights, including Iran’s needs to enrichment as well as different (the use of nuclear technology for) medical and non-medical purposes, are be observed.

And the Prayer Leader in Mashhad, Ayatollah Ahmad Alamalhoda, belittled the interim nuclear deal, “The negotiating team standing tall against the greedy West is more of a victory for the revolutionary people of Iran than the Geneva Agreement.”

The latest quarterly report of the International Atomic Energy Agency confirms that Iran is continuing to implement its commitments under November’s interim Joint Plan of Action.

The Friday report says that Iran, as agreed with the 5+1 Powers, has suspended production of 20% uranium and has diluted stock or converted it to oxide powers. It also establishes that Iran has provided the IAEA with additional information about its activists, the first technical cooperation on the issues since 2008.

Iran’s stockpile of 20% enriched uranium has fallen to 38.4 kilograms, compared to 160 kilograms in the IAEA’s February report. Tehran has commissioned a facility to convert 3.5% uranium to oxide powder, reducing the fear of a “break-out” capability to shift quickly to a militarized nuclear program.

The reports says Tehran has provided the IAEA with information on explosive wire detonators, a key concern of the US and its European partners, and has agreed to supply material on “possible military dimensions” of nuclear operations. The Islamic Republic and IAEA are making progress on arrangements for safeguards for the under-construction Arak heavy-water nuclear reactor.