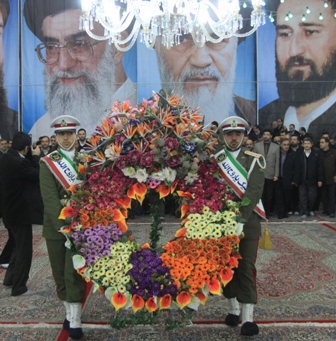 Shahr-e Rey, Tehran prov, May 24, IRNA – Commanders of the armed forces renewed allegiance to the ideals of the Founder of the Islamic Republic, the late Imam Khomeini Saturday morning.

The commanders visited the mausoleum of the late Imam in south of the capital on the occasion of Khordad 3 marking the anniversary of the liberation of the port city of Khorramshahr in southwest of the country from the Iraqi occupation on May 24, 1982.

Units of the Iranian Army and Defense Ministry as well as commanders, officials and staff of the Islamic Revolutionˈs Guards Corps (IRGC) and Basij participated in the ceremony.

They laid wreaths at the tomb of the Father of the Islamic Revolution.

The commanders further visited the tombs of a number of martyrs of the eight-year Iraqi imposed war.