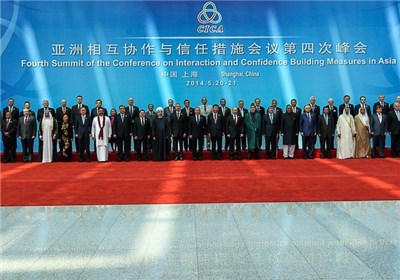 TEHRAN (Tasnim) – In the final declaration of the 4th summit of the Conference on Interaction and Confidence Building Measures in Asia (CICA), member states voiced support for a proposal made by the Iranian president for a World Against Violence and Extremism (WAVE).

The 4th summit of CICA in China’s Shanghai wrapped up with a declaration on cooperation between Member States in order to establish peace, stability and security in Asia.

The participants also praised an act proposed earlier by the Iranian President Hassan Rouhani on the World Against Violence and Extremism.

In December last year, the United Nations General Assembly approved a proposal presented by President Rouhani, which asks the UN member states to unite against extremism, violence and sectarian conflicts in all their forms.

During the CICA summit in Shanghai, the members focused on the effort and cooperation to prevent risks that may affect the region.

The participants also discussed the issues of insecurity and the cultivation and production of drugs in Afghanistan, peace in the Middle East and the fight against terrorism and weapons of mass destruction on the world stage.

Established in 1992, CICA is a forum for dialogue and confidence building and now has 24 member countries and 13 observers.