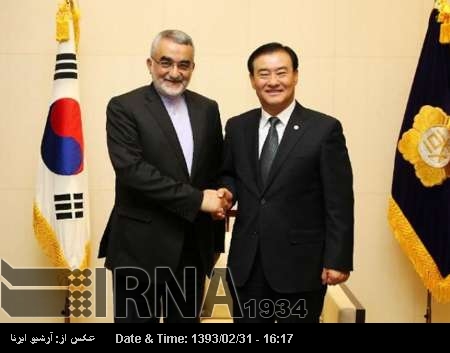 Speaking to South Korean Ambassador to Tehran Song Woong-Yeob in Tehran, Boroujerdi said progress made by both Iran and South Korea in such fields as urban development, aerospace, and nano-technology serve as a suitable ground for expansion of mutual trade and economic ties, which should used in favor of both nations.

He said officials of the two countries are duty-bound to launch joint efforts and use their good political relations and use existing capacity for the purpose.

He added that to expand bilateral trade ties, the two countries should seize the opportunities available in the best possible manner free of any political considerations.

Pointing to Iran-G5+1 nuclear talks, Boroujerdi said the talks will continue within the frameworks of preserving the Iranian nationˈs rights to use nuclear energy for peaceful purposes and benefit from NPT advantages such as R&D in technology.

He said confidence building, good intention and respect for distinguished international rights would ease reaching agreements by the two sides.

The South Korean diplomat, for his part, said his country welcomes cooperation with Iran given their age-old ties.

He said exchange of high-ranking delegations will be an important step towards promoting mutual cooperation. ˈI firmly believe that ties between various sections of the two countriesˈ parliaments will facilitate expansion of mutual relations.ˈ