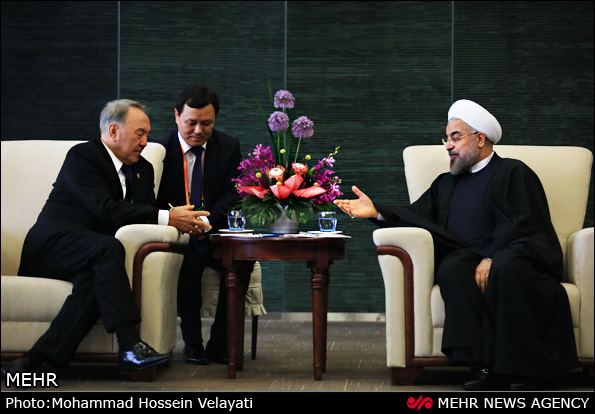 Hassan Rouhani who is in China to participate in fourth CICA conference met with Kazakhstan’s president Nursultan Nazarbayev, when he emphasized to improve bilateral ties with this Central Asian country.

Rouhani said that Kazakhstan was an important country of the region and that the Islamic Republic of Iran was willing to boost the relations. “The officials in both countries should address the banking problems; a visit by Central Bank governors of both countries would prove effectual,” he added.

President also called for more cooperation in the Caspian Sea and related legal issues. “On trade, shipping, environmental and tourism development in the Caspian Sea are important issues where Iran and Kazakhstan should exploit the capacities and opportunities for a better economic and trade relations,” Rouhani said.

Rouhani also emphasized the acceleration of the railway project which would connect Iran, Turkmenistan, and Kazakhstan. He welcomed an invitation by Nazarbayev for a visit to his country. “The relevant committees in both sides should prepare the grounds for this visit,” he added.

Nazarbayev believed that Iran and Kazakhstan should extend current level of relations. “Exploiting Iran’s enormous transit capacities through railway is important for Kazakhstan, and we will work to complete the project,” said the Kazakh president.

“Kazakhstan and Iran had similar positions on Caspian Sea legal issues. We should settle the differences through drawing on common elements and in a framework informed with expert views of the officials of the littoral countries,” said Nazarbayev.

He also said that his country would support Iran’s negotiations with the west renewed with Rouhani‘s election to presidency and hoped that sanctions on Iran would be removed. Nazarbayev described Rouhani’s election to the position as “not only a source of hope for Iranians, but also so for the region.”