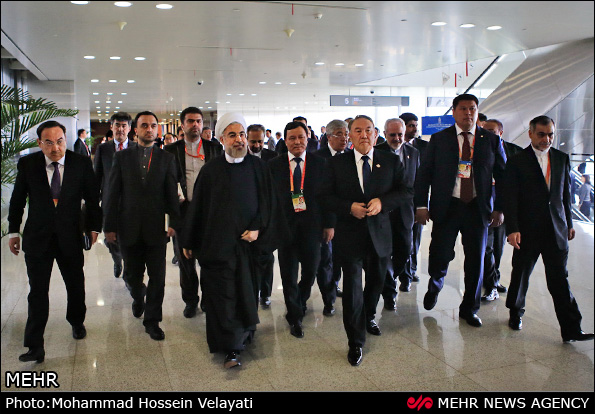 Shanghai, May 21, IRNA – Iranˈs President Hassan Rouhani said here on Wednesday that pursuing a win-win approach and preventing excessiveness and threats would lead Iran-G5+1 nuclear talks to a final conclusion.

President Rouhani made the remarks in an address to the two-day summit of the Conference on Interaction and Confidence Building Measures in Asia (CICA) which started this morning.

The President noted that a final conclusion should guarantee Iranˈs nuclear rights and remove legitimate concerns of both sides.

More in his speech, President Rouhani stressed the need for cooperation and convergence of CICA members to avoid fatal danger of the Weapons of Mass Destruction (WMD) which threatens humanˈs peace and security.

The Iranian President recalled his address to the 68th United Nations General Assembly session in 2013 during which he had said the only way to escape the threat of WMD is to destroy them completely.

While, Iran is against atomic weapons based on its defense doctrine and religious teachings, it believes that is the right of all nations, including Iranians, to use nuclear technology for peaceful purposes, he stressed.

Recalling his proposal to the 68th session of the UN General Assembly in which he had called on all nations across the globe to denounce violence and extremism, the President said according to the proposal which was later adopted by the UN members as the World Against Violence and Extremism (WAVE) Act, Iran has called for a world where weapons will be replaced by words, force by wisdom and destruction and corruption by security and stability.

President Rouhani expressed hope that the WAVE Act, overwhelmingly ratified at the UN General Assembly with 190 votes, would be also considered a document of the CICA summit and a basis for its future moves.

He also hoped that the CICA members would help implement the WAVE Act throughout Asia.

The idea of setting up such an organization was first proposed by the Kazakh President Nursultan Nazarbayev in 1992. The body officially convened in 1996.