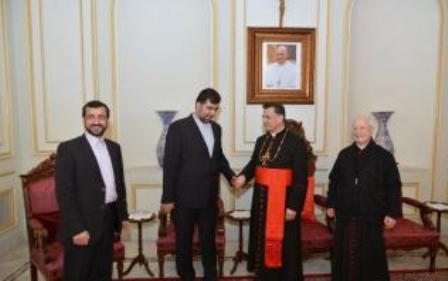 Beirut, May 19, IRNA – Lebanese Christian Maronite Patriarch Beshara al-Rai in a meeting with Iranian Ambassador to Beirut Qazanfar Roknabadi called for the further expansion of relations with Iran.

ˈWe call for the best relations with Iran as an important regional country in line with the two countriesˈ common interests,ˈ Patriarch al-Rai said during the meeting in Beirut on Monday.

Patriarch al-Rai pointed to the elections in Lebanon, and said, ˈPresidential election in Lebanon is very sensitive and important and that different Lebanese political currents should reach a consensus in the shortest possible time.ˈ

Roknabadi, for his part, pointed to the superior status of Lebanon in the region, and said, ˈPeaceful coexistence of different Lebanese tribes alongside each other is among the most important peculiarities of this country.ˈ

The Iranian ambassador underlined that the peaceful coexistence of the Lebanese people is an appropriate model for other regional countries to follow.

Roknabadi laid emphasis on Iranˈs fixed principles in supporting stability in Lebanon, and said, ˈWhat is of prime importance for Iran is maintaining solidarity of Lebanese people in their resistance against the occupation of the Zionist regime.

He pointed out that the Islamic Republic of Iran has always tried in line with strengthening Lebanonˈs different political currents and it does its best in this regard.