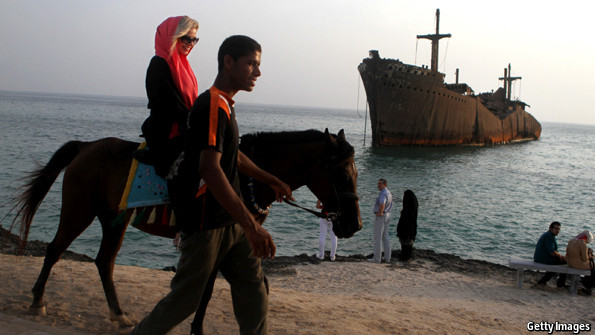 THE tiny island of Kish off the southern coast of Iran resembles a building site. Five thousand people work into the night to complete Padide Legend City that will house a shopping centre, five-star hotel, amusement park, and the world’s largest anchor. Its castle-shaped 11,000-square-metre restaurant was completed in just 110 days. “We could rival Dubai,” says a local contractor, longingly.

This year the island’s authorities took part in the Arabian Travel Market, a tradefair, in Dubai for the first time in eight years and are pushing for more publicity. Investors are coming knocking, boasts Ahmed Tabrizi, an advisor to the Kish authorities, fresh from a week talking to investors from Japan and China.

With its spotless beaches, Kish was a playground for Iran’s Shah and was later designated as one of the country’s free zones in 1989. Visitors can enter without a visa and the authorities charge no taxes. Yet until now this has failed to lure tourists and businessmen. Currently only 20% of the companies in Kish’s free trade zone involve foreign partners. Visiting foreigners are mainly migrant workers from the United Arab Emirates (UAE) who make the half-hour plane hop to renew their visa. They are not big spenders, usually staying four to a room in cheap hotels.

Kish reckons it can attract more. Visitors are still expected to adhere to Iran’s stringent dress code, but both hijabs and morals are a bit looser on the island. Couples can be seen canoodling close at the viewpoint over a stranded Greek ship, with no morality police in sight. This makes the island an attractive destination for Iranians, who still make up the bulk of the islands 1.5m visitors each year. Kish’s authorities hope to double visitor numbers by the end of 2014 and attract 5m in 2015.

Anticipating relaxed sanctions, Kish plans to build 30 five-star hotels. The authorities are in talks with Mövenpick, a Swiss chain, and hope to lure back American’s Hilton group, which left Iran after the Islamic revolution in 1979. Abu Dhabi-based hotel chain Rotana plans to open four hotels in Tehran and Mashhad and is expected to come to Kish too. Gulf carriers are being wooed since currently Kish Airlines is the only way to fly to the island.

Kish’s best hope of boosting visitor numbers may be tourists on their way to mainland Iran. The government has started to introduce visas on arrival for some nationalities.  Americans and Brits, who will still need visas in advance, could use Kish to obtain one in two days. “Kish is going to be the gateway to Iran,” reckons Mr Tabrizi.