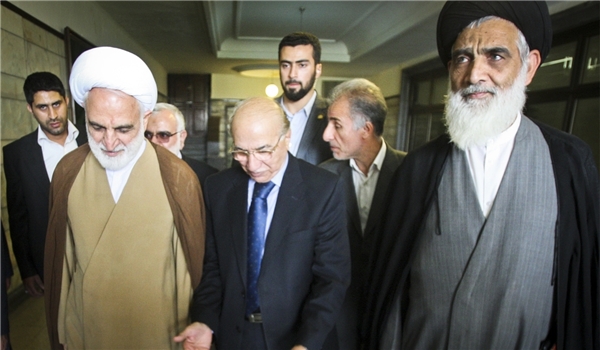 TEHRAN (FNA)- Senior Iranian and Iraqi judiciary officials in a meeting in Tehran on Tuesday underlined the need for expanding judicial cooperation between the two Muslim states.

During the meeting in the Iranian capital today, Iranian Prosecutor General and Judiciary Spokesman Gholam Hossein Mohseni Ejeie and Iraqi Judiciary Chief Medhet Al-Mahmoud explored avenues for bolstering and reinvigorating judicial ties as well as exchange of judicial information between the two friendly and brotherly countries.

Iran and Iraq have enjoyed growing ties ever since the overthrow of the former Iraqi dictator, Saddam Hussein, during the 2003 US invasion of the Muslim country.Last month, Pour Mohammadi conferred with his Iraqi counterpart Hassan al-Shammari on bilateral ties in Baghdad.

Al-Shammari, for his part, hailed Iran’s determination to support the Iraqi stability and security as well as the democratic process.

During the meeting, the Iranian and Iraqi justice ministers signed a memorandum of understating (MoU) on extradition of prisoners.

According to the agreement, the Iranian and Iraqi justice ministries will set up a joint committee at the earliest to examine the situation of the prisoners and prepare the ground for their extradition.

The prisoners will serve their prison terms in their own countries.

Pour Mohammadi paid a two-day official visit to Iraq at the invitation of al-Shammari.