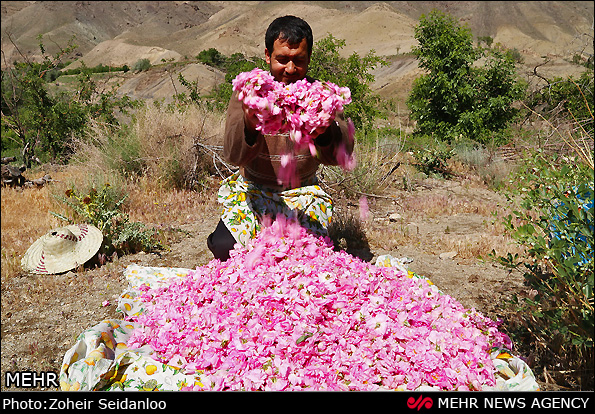 ‘Golabgiri’ in Iran; season fragrant with scent of flowers

KASHAN, May 19 (MNA) – The 2nd month of Persian Solar calendar is ‘Golabgiri’ season in Iran which is distillation of rose petals.

In Ordibehesht, coincident May and June, an annual festival of Rose and Rose Water is being held in Kashan, Iran. This is the time for picking up the Mohammadi roses to obtain rosewater out of them.

Golab – rosewater – is a fragrant distillate of rose which in Iran is used in different traditional dishes to flavor them or consumed as a religious perfume as well. Although there are many modern manufactories constructed to produce rosewater but it is made traditionally in large number in cities around Kashan, home to Mohammadi rose in Iran.

The traditional ceremony of obtaining rose hydrosol attracts a great number of people from around the country and outside the country to Kashan, Qamsar, Niasar, Barzak and other neighborhood cities.

Production of rosewater in Iran dates back to over 2500 years ago. There were distillation equipment containing large copper pots with special pipes to obtain herb hydrosol and special oven made by bricks. The machines have been used to produce rose water and other herbs hydrosols for commercial purposes.

Before distillation starts people collect Mohammadi roses and collect their petals to put into the copper pots. Then the pots are put on the oven made from bricks or stones and mud.

Almost every 30 Kg of rose petals are poured into the pot containing 80 liters of water. The pot is then covered to steam the water and rose. The pots include iron or aluminum pipes for the steam moving through to obtain hydrosol.

The process end and Golab – rosewater – is ready with its excellent fragrance to be used in Persian dishes and for healing purposes.