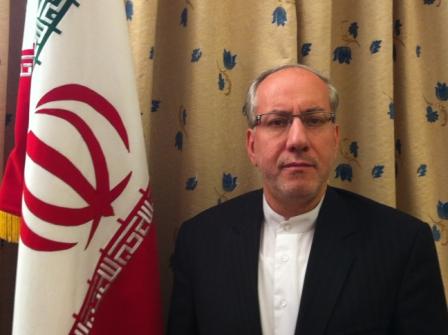 Berlin, May 19, IRNA – Despite emergence of certain differences of opinion in nuclear talks, the atmosphere is ripe for achieving a comprehensive final deal, only on condition that western sides will fully act according to their commitments, as the Iranians are doing so, Iran’s ambassador to Denmark said Sunday.

Speaking for a group of university students and professors at Denmark’s Aarhus University about the major regional and international developments, Hamid Babyat referred to the latest round of Iran’s nuclear talks with six world powers, arguing that resolving the nuclear dispute is among the issues of utmost importance in Iran’s foreign policy.

“The nuclear issue which had overshadowed Iran’s relations with the western countries and led to the issuance of inhumane and anti-human rights sanctions during the past couple of years unfortunately provided a pretext for some countries for freezing Iran’s relations with its different partners,” said the Iranian ambassador to Denmark.

Bayat said that it was the Americans who initiated the nuclear activities in Iran before the Islamic Revolution and contributed to the beginning of such activities, but after the revolution, since the Iranians preferred to pave the path towards independence, the Americans not only backed off from that project, but also spent their entire efforts aimed at stopping it.

“Despite the numerous problems created for the Islamic Republic by its enemies in the way of proceeding with its nuclear program, relying on the capabilities of the Iranian technicians and engineers, in the framework of the nuclear NPT and under the strict supervision of the UN nuclear watchdog, Iran proceeded with its nuclear activities and achieved important results in that field which can be used in medical, medicine production, and clean energy fields,” he reiterated.

Bayat said that the dimensions of the nuclear issue are mainly related to the politicizing hue and cry created by certain countries and extremist lobbies that have created obstacles in the way of resolving it through technical talks and a legal procedures.

He meanwhile referred to the peaceful nature of the Iranian nuclear program, recalling the Supreme Leader’s religious decree (Fatwa) on being religiously forbidden of manufacturing nuclear weapons.

“Basically such weapons have no place in the defense doctrine of the Islamic Republic, and besides the official source for the purpose, the International Atomic Energy Agency (IAEA) has thus far reported no deviation in Iran’s nuclear program, and the claims made in this respect have all been baseless on the part of certain antagonist countries,” he stressed.

He said that Iran has always emphasized that the nuclear weapons not only do not provide security for any country, but can themselves cause insecurity and instability, which is why the Islamic Republic of Iran has always been a supporter of declaring the Middle East region as a WMD free zone, including the nuclear weapons, and in the second place the whole world should be freed from the nuisance of such weapons.

That is while a senior Iranian negotiator Abbas Araqchi was quoted as saying by lawmaker Hojjatollah Khodaei Souri on Sunday that the Nuclear talks between Iran and the six countries have not failed and will continue in the near future.

Araqchi had made the remarks in a meeting of Foreign Relations Committee of Majlis National Security and Foreign Policy Commission, reviewing what happened during recent nuclear negotiations between Iran and the P5+1 was on the Sunday agenda of the parliamentary committee’s session.

Araqchi briefed the lawmakers on nuclear talks in Vienna last week and said that the two sides failed to agree on a number of issues but expressed hope that the next round of talks would yield good results, said Khoda’ie Souri, a member of the Parliament’s Foreign Relations Committee.

The deputy foreign minister said that the next round of talks is due on June 16-20, but he noted that informal consultations are possible to take place between the two sides even before that date.

Araqchi said that negotiations on drafting a final agreement have grown more difficult. However he expressed hope to get it done by July 20, the deadline set to lift the arbitrary sanctions.