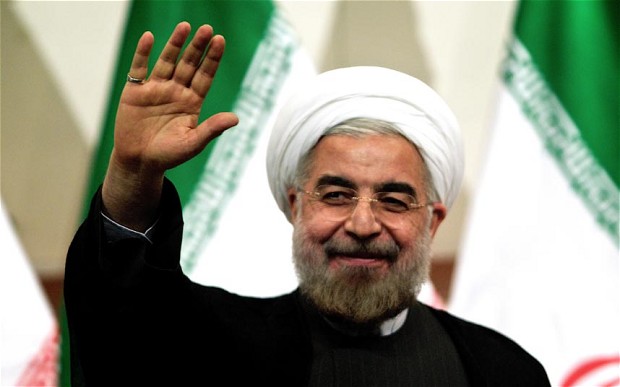 Rouhani due in China on 3-day visit

Rouhani to travel to China on 3-day visit

Iran’s President Hassan Rouhani is set to travel to China on a three-day visit, during which he will attend the fourth summit of the Conference on Interaction and Confidence Building Measures in Asia (CICA).

The Iranian Parliament Speaker’s Adviser for International Affairs, Hossein Sheikholeslam, deplored the recent abduction of more than two hundred Nigerian school girls by Boko Haram, a Wahhabi Al-Qaeda affiliate in Nigeria, and said such a behavior is not Islamic.

Iranian President Hassan Rouhani underlined the need for bringing back the Iranian elites from abroad and attracting even the elites of other countries to help Iran’s progress and advancement in different political, economic and cultural areas.

The Iranian Intelligence Ministry announced on Sunday that it has disbanded a terrorist cell which had conducted sabotage missions in various parts of the country.

Iranian Foreign Minister Mohammad Javad Zarif said Sunday that clinching a final nuclear deal with world powers is still “possible” despite a tough round of talks this week, according to Agence France-Presse.

Majlis Speaker Ali Larijani on Sunday visited an exhibit on ˈ Iran, Victim of Terrorismˈ. The exhibit focuses on the US support for the terrorist Mojahedin Khalq Organization and the waves of terrorist operations MKO carried against ordinary people who stood against hypocrites in Iran in 1980s.