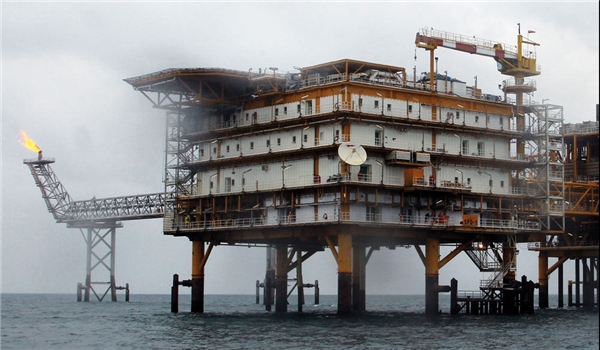 TEHRAN (FNA)- Phase 12, as the main phase of Iran’s South Pars gas field, is planned to boost production up to 25 million cubic meters per day (cm/d) in late May or in June.

The new record of gas output in the phase 12 is expected to happen after a gas desalting unit starts work late in may or early in June.

Installation of platforms B and C of Phase 12 of South Pars are expected to be completed in June or July.

All wells of this phase are ready to start gas production.

Phase 12 of South Pars gas field is developed to produce 75 mcm/d of rich gas for feeding national pipeline (50 mcm/d) and liquefied natural gas (LNG) production units. This phase is also forecasted to supply 120,000 b/d of gas condensate and 750 tons a day of sulfur.

Petropars is the main contractor for this phase development.

Earlier this month, a senior energy official announced that all development phases of the giant South Pars gas field will be accomplished in the next three years.

“The remaining phases of South Pars project will be ready before the beginning of 2017,” Managing Director of the National Iranian Oil Company (NIOC) Rokneddin Javadi told reporters on the sidelines of his visit to the 19th International Oil, Gas, Refining and Petrochemical Exhibition in Tehran at the time.

Speaking to FNA in the Southern city of Assalouyeh and during a visit to phases 12, 17 and 18 phases, the oil minister said, “Phase 12 is one of the important and big phases of the South Pars and its completion is important.”