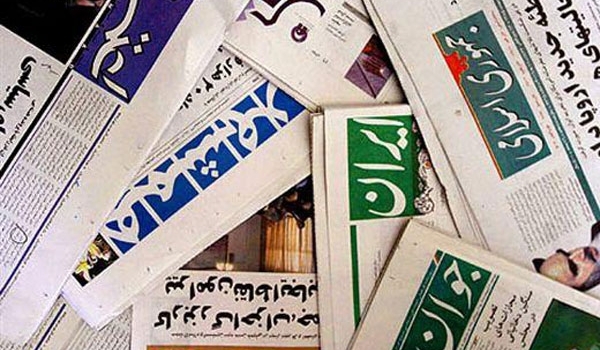 What the principlist newspapers say in their Editorials today

TEHRAN (FNA)- The headlines and summaries of the editorials and main articles of Tehran’s Principlist papers this morning:

Resalat: The Arak heavy water reactor and Bushehr atomic power plant are Iran’s redlines in the negotiations with the world powers (the US, Russia, China, France and Britain plus Germany). The West’s alleged concerns about Iran’s uranium enrichment activities are unfounded. When Iran can produce the fuel for its nuclear sites for civilian purposes, why should the country import enriched uranium from abroad. The western countries should adopt a more realistic approach towards Iran’s peaceful nuclear activities.

Kayhan: The western countries, specially the US, have sought excessive demands from Iran in their talks in Vienna. Although they have not conceded any privileges to Iran, they are demanding Iran to take new measures in their favor. They have taken the Iran-world powers talks hostage to make Iran stop some of its nuclear activities in lieu of the removal of certain sanctions.

Siasat-e Rouz: The US officials are repeating their past mistakes towards Iran. As Supreme Leader of the Islamic Revolution Ayatollah Seyed Ali Khamenei has said the US animosity towards Iran is not over the country’s nuclear program, but it is because of other issues and it dates back to a long time ago. Although the International Atomic Energy Agency has reiterated that Iran’s nuclear activities have been peaceful and within the IAEA’s framework, the western countries, specially the US, still seem unhappy with the country’s performance. So what do they want?

Javan: The US is trying to take advantage of its Iranophobia scenario in the ongoing talks between Iran and the six world powers (the US, Russia, China, France and Britain plus Germany). The movements of the American military are taking place in coordination with the US Congress. The US congressmen have reiterated that Washington’s military presence in the Persian Gulf should be increased in line with the Iranophobia scenario. Based on the same scenario, The US undersecretary of state in a visit to the Persian Gulf countries spoke about creation of a missile shield in those countries against the so-called Iran’s possible threats.