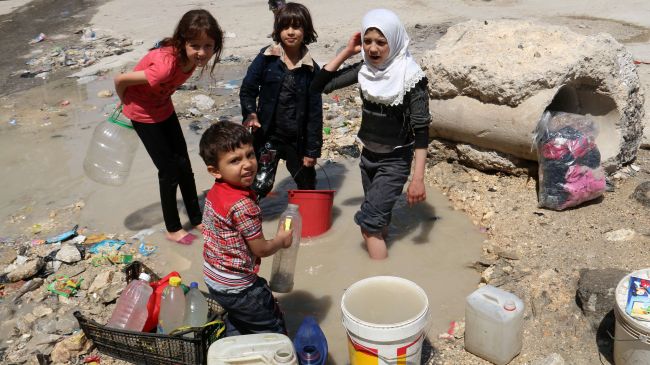 UN Secretary General Ban Ki-moon has blasted the foreign-backed militants operating in Syria over cutting water supplies to people in the northwestern city of Aleppo.

The UN chief said in a statement issued on Friday that “preventing people’s access to safe water is a denial of a fundamental human right.”

“Deliberate targeting of civilians and depriving them of essential supplies is a clear breach of international humanitarian and human rights law,” Ban stated.

The UN secretary general also called on the militants to immediately restore services to the city.

According to statistics compiled by the UN, some 2.5 million people have been deprived of access to clean water since the militants cut water supplies in the strategic city more than a week ago.

There have been warnings about the possibility of outbreak of water-borne diseases in the region since some residents have resorted to drinking unclean water.

The cut had reportedly forced people to queue in front of wells to collect water.

Militants also cut the electricity supply to government-held areas of the city and the nearby neighborhoods last month.

On May 7, the al-Qaeda-linked al-Nusra Front militants blocked a humanitarian aid convoy from reaching the towns of Nubbul and al-Zahraa in Aleppo’s northern countryside.

Syria has been gripped by deadly violence since March 2011. Over 150,000 people have reportedly been killed and millions displaced due to the violence fueled by the militants.