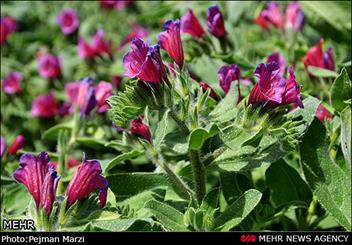 RAMSAR, May 17 (MNA) – Ramsar, Mazandaran in Iran, is the home to many flowers with medical uses including borage, also known as starflower.

This herb is native to Mediterranean regions and is growing in vast amount in most of Iranian mountainous and coastal areas.
Ramsar is the home to borage herb in northern province of Mazandaran, and the city hosts National Borage Festival this year.

Borage grows wild in most of regions in Iran, but it is planted in Ramsar for especial medical purposes.
Traditionally, borage was cultivated for culinary and medicinal uses, although today commercial cultivation is mainly as an oilseed.
Traditionally borago officinalis is prescribed for hyperactive gastrointestinal, respiratory and cardiovascular disorders such as gastrointestinal (colic, cramps, diarrhea), pulmonary (asthma, bronchitis), cardiovascular, (cardio-tonic, antihypertensive and blood purifier), and urinary (diuretic and kidney/bladder disorders).

In Iran people make tea using the plant for treat colds, flu, bronchitis, rheumatoid arthritis, and kidney inflammation. It is said to be warm in nature and alleviates symptoms that are caused by using foods cold in nature such as cucumber and fish. People with heart problems can benefit using the borage tea, since it promotes provision of oxygen to the heart, that’s why one should use this herb in moderate amounts.

Naturopathic practitioners prescribe borage for regulation of metabolism and the hormonal system, and consider it to be a good remedy for PMS and menopause symptoms such as the hot flash. The flowers can be prepared in infusion.
One case of status epilepticus has been reported that was associated with borage oil ingestion.
Borage grows from May to September in different regions and National Borage Festival is annually held in Ramsar, believed to be the home of this flower in Iran.