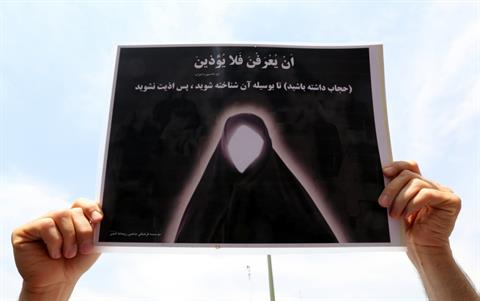 TEHRAN: Around 1,000 Iranians staged a rally on Friday to demand that the government fully enforce obligatory rules that women be veiled in public.

The demonstrators, both men and women, protested in central Tehran, carrying placards and chanting that the authorities “must stop the spread of vice” and enforce the hijab.

A defining feature of Iran’s interpretation of Islamic law since the 1979 revolution, hijab obliges women to cover their hair and much of their body in loose clothing when outside, regardless of their religion.

Hijab is among the practices that religious leaders and more traditional and conservative Iranians fear are being targeted by a so-called “soft war” launched by the West against Iran’s Islamic values.

A dedicated “morality police” has long handed out fines, verbal notices or even arrested women it considers are not observing the rules properly.

Despite such measures, the protesters on Friday wanted more responsibility and action from the government of President Hassan Rouhani, who has expressed a desire to expand social freedoms — to the disapproval of hardliners.

“In some parts of the city, the veils are coming off right now and the full violation of hijab can be witnessed,” Hojjatoleslam Kazem Sediqi said in a Friday prayers speech at Tehran University, shortly before the planned rally.

It was unclear whether Sediqi was implicitly referring to a recent online campaign by thousands of Iranian women who posted pictures of themselves flouting the dress code inside the country.

More than 200,000 have used the Facebook page “Stealthy Freedoms of Women in Iran”, launched to spark a debate on whether women should have the right to choose to wear the hijab.

The campaign is yet to generate a reaction from the government.

Last week, thousands of religious conservatives held an unauthorised protest in Tehran, urging the government to confront the violation of hijab rules.